Posted on March 24, 2019 by Brett David Roberts in College Basketball,Headlines 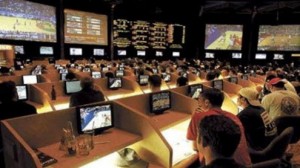 #11 seeded Ohio State won its opening round matchup over #6 Iowa State by a score of 62-59. The Buckeyes led by two at the half and closed the game strong to emerge as one of three 12 over 5 upsets this year. Kaleb Wesson and Keyshawn Woods combined to core 40 points on 15 of 31 shooting and the Buckeyes shot 39.7 percent from the field as a team in a tough, defensive affair. Ohio State held Iowa State to 43 percent shooting, and neither team was hitting its threes: OSU was just 5 of 20 and Iowa State was 6 of 22. The Buckeyes won the game on small things: a +7 rebound advantage, +1 turnover differential, and Ohio State did a better job of moving the basketball with fewer turnovers and more assists.

But Iowa State did not go quietly: It got 26 points from its two key reserves and kept the game close before Ohio State closed the game strong to emerge as the upset winner. The Buckeyes were just 20-14 this season and had a losing conference record of 8-12. The Buckeyes also lost four of its final five games entering this tournament, including three straight losses to AP-ranked opponents. Ohio State is a good defensive team though, allowing just 66 points per game (no. 42), though it is not an overly potent club itself averaging just under 70 points per game. The Buckeyes will hope Kaleb Wesson can continue his hot shooting, as he averaged 50.2 percent shooting on the year and led the team in scoring at 14.6 points per game. OSU may need 20-plus from him again this round.

The Houston Cougars possess the No. 8 most-stingy defense in the nation, limiting its opponents to just 61.0 points per game while scoring 76.2 itself, good for a win differential of +15.2. The Cougars held two of its final opponents under 60, winning both games over UConn and Memphis. Its defense could be the difference maker in this tournament, and the Cougars are not short on scoring options itself. Houston is led by Corey Davis Jr. who averaged 16.7 points, 3.2 rebounds, and 2.7 assists per game while playing a team-high 32.8 minutes per game.

Armoni Brooks starts alongside him in the backcourt and averages 13.6 points and 6.5 rebounds, a team best. Davis shot 38 percent on his threes, while Brooks and all three of Houston’s top-5 scorers shot 35 percent or better. The Cougars attempted 838 threes this season at a 36.4 percent clip, and it also limited its turnovers to just 11.5 per game. Houston shoots 70.4 percent from the line as a team.

The Cougars are hoping Davis continues to be so consistently good. He had just 12 points in the loss to Cincinnati, but in the four games prior had scored 20.2 points per game while shooting 42 percent or better in all four games. The Cougars need him to be clicking because against the Bearcats he shot just 23 percent from the field while also battling foul trouble.