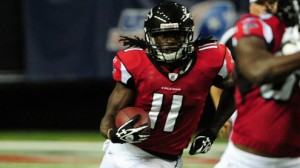 The Atlanta Falcons lost Week 1 25-38 to the Seattle Seahawks, and NFL Oddsmakers do not project this week to bring much relief. The Falcons visit the Green Bay Packers as 4.5-point underdogs in NFL Action on FOX. The over/under is set at 54 points according to pro football oddsmakers at bookmaker 5dimes.

Despite sacking QB Russell Wilson three times, the Seahawks made quick work of the Falcons’ defensive efforts. Wilson completed 322 yards passing with four touchdowns, while also rushing three times of 29 yards (28 gained on one particularly impressive one). Outside of Wilson, the main two backfield options Carlos Hyde and Chris Carson both struggled, averaging just 3.4 yards-per-carry between them. It hardly mattered with Wilson’s core of receivers putting in such heavy work, but the Seahawks will look for some better run production on its list of things to improve in Week 2.

In terms of WRs, DK Metcalf and Tyler Lockett were the two stars of the offense. Metcalf had just four receptions, but led the team in yardage (95) and had one of the four touchdowns. Carson came out of the backfield to catch six for 45 yards and a pair of TDs, while Lockett finished No. 2 in yardage with 92 yards on a team-high eight catches. Offensively, the Falcons did get a strong game from Matt Ryan, albeit his costly interception held things back some.

Todd Gurley was the only back with even moderate success (56 yards on 14 attempts), and the Falcons backfield averaged just 3.4 yards per carry with No. 2 option Brian Hill managing just 12 yards on his only three tries. Julio Jones, Calvin Ridley, and Russell Gage all topped 100 receiving yards, and Ridley scored the team’s only two receiving touchdowns. While Atlanta ostensibly was very competent on offense, it was not enough to overcome its defensive shortcomings, nor the turnovers. The Falcons game plan to improving on that should be rather lucid, but it will have to surprise Dallas’ defense much more than it did Seattle’s in that tough Week 1 loss.

Falcons are 4-0 ATS in their last 4 games as a road underdog.

Falcons are 4-0 ATS in their last 4 road games.

Falcons are 5-1 ATS in their last 6 games as an underdog.

Falcons are 4-1 ATS in their last 5 games overall.

Falcons are 4-1 ATS in their last 5 games after allowing more than 350 total yards in their previous game.

Falcons are 6-2 ATS in their last 8 games after accumulating more than 350 total yards in their previous game.

Falcons are 2-5 ATS in their last 7 games following a ATS loss.

Falcons are 5-13 ATS in their last 18 games after accumulating more than 250 yards passing in their previous game.

Falcons are 6-22 ATS in their last 28 games after allowing more than 250 yards passing in their previous game.

Falcons are 1-4 ATS in their last 5 games after allowing more than 30 points in their previous game.

Falcons are 1-5 ATS in their last 6 games on fieldturf.

Falcons are 1-5 ATS in their last 6 road games vs. a team with a losing home record.

Falcons are 1-6 ATS in their last 7 games in September.

The Dallas Cowboys lost a heartbreaker in Week 1. The Cowboys trailed by just a field goal heading into the fourth quarter, but the Rams dominated defensively while maintaining control over the clock, to close the first week out with a victory over the Cowboys.  Dak Prescott threw for 266 yards and a touchdown, but he was sacked three times for 22 total yards lost and he completed just 25 of 39 passes. Prescott rushed three times for 30 yards, while star running back Ezekiel Elliot put in a full day’s work with 22 carries for 96 yards and a touchdown.

The Cowboys did a decent job with its pass defense, limiting Jared Goff to 20 of 31 passing and forcing an interception. The Rams did get 153 rushing yards, with 15 coming from Goff, but Malcolm Brown and Cam Akers combined for 32 attempts between them and 118 yards. Robert Woods did his work as a receiver, too, catching six of eight targeted passes for 105 yards. Despite those clear problems, the Cowboys were fortunate enough to hold L.A. without a single receiving touchdown. This loss will not fall on the defense, but rather on the holes in offensive production that have to find their answers in Week 2 against Atlanta.