Posted on January 27, 2019 by Brett David Roberts in Headlines,NBA 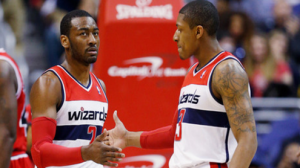 The Washington Wizards have won six of its last 10 but it still lingers six games below .500 and it is out of the playoff picture in the East. It trails No. 8 Charlotte by two full games in the standings.

The Wiz have begun to pay better attention to the defensive end, and that is the primary reason behind its recent success. Only two of its last six opponents have scored more than 106 points, and that was a 140-138 loss to the Toronto Raptors, as well as its last 118-126 loss to the Golden State Warriors.

Trevor Ariza has assumed a comfortable role as the team’s No. 3 option after John Wall and Bradley Beal. Beal is having an All-Star season and career year. He is averaging 24.7 points, five rebounds, and five assists per game. Ariza helps tie it together with his two-way play, as one of the best defensive wings in the NBA. He is averaging nearly 15 points per game in his 16 games as a Wizards, and it appears that (though no one thought it could) he could change the Wizards’ fate this season.
In its 17 games with Ariza, the Wizards have fared 8-9, which is an improvement and a mark good enough to be playoff-worthy in the Eastern Conference. When analysts and fans talk about team-changing talents, Ariza is not the first to come to mind, but he has been just that thus far for Washington.

The San Antonio Spurs have won five of its last 10 games and are currently 28-22. The Spurs trail the Houston Rockets by one game in the Southwest Division standings, and this is a team truly without as much talent as Houston but it does possess one of the greatest coaches of all-time in Gregg Popovich. The Spurs replaced do-it-all forward Kawhi Leonard with 2-guard DeMar DeRozan this offseason, but this is not a Spurs team resplendent with offensive talents. LaMarcus Aldridge and Rudy Gay are both very solid strong veterans, but the rest of the roster is a rag-tag collection of players Popovich has found every way to maximize the respective talents of.

DeRozan and Aldridge combine to score 42.2 points per game, but the offense has hardly been a problem for this Spurs team which averages 112.3 points per game. Bryn Forbes has evolved into a very useful guard and is averaging 13.6 points per game, and Marco Belinelli is still a sharpshooter who thrives in the right system. The Spurs are hoping Derrick White can become a star, and he has looked good in his 22 starts this season. Even Jakob Poeltl has found his defensive calling under Popovich and though he plays just 15 minutes a game, the Spurs utilize an 11-man rotation and call deep into its bench.
?
Veteran and future Hall of Famer Pau Gasol has missed the majority of the season and was already looking as though he hit the inevitable career-type-ending “wall.” Even without Gasol, the Spurs manage to get five points or more from 10 different players and keep a fresh rotation the court. Pop always finds new ways to reinvent his same schemes, and the effect is a team seven games above .500 after losing an MVP caliber talent this offseason. San Antonio could not really reasonably expect any better than this.