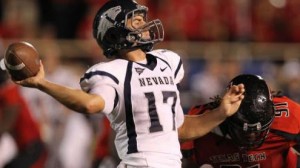 Boise State is 3-2 on the season and 1-1 in Mountain West play and will travel to Nevada to face a 3-1 Wolf Pack team. The Broncos are 4.5-point favorites in the game, which has a total set at 53 according to college football odds.

The Broncos have had a good pass attack this season, ranking 32nd in the nation with 292.6 yards per game. The Broncos lost opening week to then- No. 18 Ole Miss, but followed that loss up with three straight wins over Colorado State, UConn and LA-Layfayette. Last week, the Broncos dropped to conference-rival Air Force 28-14.

In that game, the Broncos had more yardage, 467-335 and Air Force had just 48 passing yards, but Kale Pearson and Jacobi Owens each rushed for over 100 yards and a TD. Pearson threw just 11 passes in the game, though one was for a TD.

Broncos QB Grant Hedrick has been shaky this season. Though he’s completed 70.0 percent of his passes for nearly 1300 yards on the season, he’s been horrible with his interceptions, having thrown nine already to just five TDs. His 133.1 QB rating is a reflection of his high completion ratio.

RB Jay Ajayi has rushed for 557 yards and five TDs on the season, while the other two TDs have come from Hedrick and Devan Demas. Ajayi sees almost all the carries that Hedrick doesn’t keep for himself, as the rest of the team has had just 17 carries outside that talented duo.

Matt Miller has been the No.1 Wideout for Hedrick. He’s caught 28 passes for 461 yards on the season, averaging 16.5 yards per catch. He’s accounted for three of the Broncos’ eight reception TDs.

Nevada has defeated Southern Utah, Washington State and San Jose State, and suffered its lone loss to Arizona on Sept 13. The Wolf Pack have done it with defense so far, holding opponents to just 19.3 points per game (29th in nation). Offensively, the team has relied heavily on the rush, ranking 46th in the nation with 189.5 yards per game.

QB Cody Fajardo is largely responsible for the Wolf Pack’s success, as is typically the case when the team wins. He’s thrown for 798 yards on the season and rushed for 246 yards with three TDs via the rush.

RB Don Jackson does his fair share of the rushing, too, with 329 yards on 74 carries (4.4 yards per carry) and three TDs. The Wolf Pack have had just four TD passes this season, and two of those came to sophomore TE Jarred Gipson, who has 11 receptions for 61 yards on the season.