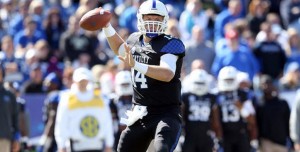 Last week, the Gamecocks fell by just one point to Mizzou, and will take on the Kentucky Wildcats this week in a game college oddsmakers are setting the line 3.5-points in favor of the Gamecocks.

South Carolina has already played four conference games thus far, and is 2-2 in those contests. Its opponent, Kentucky, is 1-1 in SEC play. South Carolina ranks 42nd in the nation in passing yardage (271.8 per game), though its defense has been weak this year, allowing 33 points per game.

Senior QB Dylan Thompson is in his senior season, and building on the success he experienced in a shortened 2013 campaign and 2012. His completions are a career high 60.9 percent, and he’s thrown 12 TDs to just three INTs. He’s been sacked nine times, though. Still, Thompson has a 143.4 QB rating. Thompson has a neck injury but is expected to play through it.

In the backfield, Mike Davis and Brandon Wilds have combined for over 500 yards and four TDs. Davis averages 4.6 yards per carry and has accounted for three of the team’s seven rushing TDs. The Gamecocks have six receivers with 100 yards or more, led by Nick Jones, 331 yards and three TDs. No. 2 receiver Pharoh Cooper has 296 yards on 24 receptions and three TDs. Cooper is nursing a knee injury but is likely to play.

Kentucky has been good this year on the strength of a formidable defense. The Cats rank 13th in the nation defensively, allowing just 15 points per game. It’s helped Kentucky handle matters against UT-Martin, Ohio and Vandy, but the Wildcats lost by six-points in triple-OT in its lone loss of the season to Florida. Still, with all games having been conference matchups, coming out of it 3-1 isn’t all that bad.

Patrick Towles has thrown for 1,117 yards on 62.2 percent completions. He’s thrown six TDs and four INTs on the season and has a QB rating of 140.5.

Braylon Heard has been the top-rusher for Kentucky, averaging 7.5 yards per carry and having accounted for two TDs already. Jojo Kemp has seen a team high 33 carries, but he averages just 4.7 yards per carry.

WR Ryan Timmons has caught a team-high 246 yards on 12.3 yards per reception, with one TD. Freshman Garrett Johnson has caught 11 passes for 181 yards and two TDs.