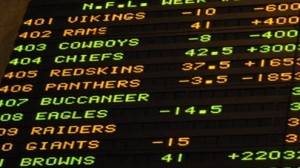 We are a little under 2 months away before the NFL regular season kicks off with the Minnesota Vikings traveling to the superdome in New Orleans to take on the super bowl champion Saints.  With the NFL season approaching we thought it would be a good time to revisit the Week 1 NFL lines and see if there have been any major changes in the NFL odds since our last post.  Here are the current NFL point spreads for week 1 as well as some notes on the moves thus far.

With more sportsbooks going live there is now enough liquidity in the NFL market place for sharp bettors to start firing away. Here are the biggest moves to date.

#455 – Miami Dolphins opened up -1 (-115) and are now sitting at -3 (-115). This was a no brainier and a move we forecasted a month back. We ourselves took a piece at -1.5 figuring this line should be closer to -3 and would likely close north of that region. With that being said the value is gone on the Dolphins and if the line keeps increasing I can see one of our week 1 NFL picks on the Bills at +3.5 or higher depending how the teams look in preseason of course.

#464 – Tampa Bay Bucs opened up -1 and now the NFL odds have them sitting at -2.5. We agree with the move here as the hapless Browns will power rate equally with the Buccaneers at the start of the season in our eyes making a fair line -3, or -3 (+100) at best.

#473 – San Francisco opened up +1 and are now favored by -2/-2.5 by most NFL linesmakers. Another move we agree with. 2 teams in opposite directions, with the 49ers on the rise and the Seahawks in the rebuilding phase.

We will continue to feature columns on the week 1 NFL betting odds as the season approaches. Preseason football is just about a month away so if you haven’t already get signed up for Maddux’s NFL Football Picks and be sure to bookmark our NFL lines page which offers live NFL point spreads from the major offshore bookmakers free of charge.