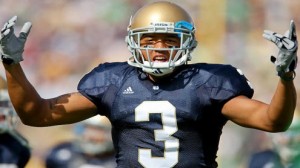 Over the month of July we will look at the top college football teams in the nation and preview 31 teams in 31 days.  Besides previews we offer college football picks and predictions against the spread to visitors.  Here is team #27 and the 2010 Notre Dame Fighting Irish Football Preview.

After five years under Charlie Weis, the Irish will completely revamp their offense. They hired former Cincinnati head coach Brian Kelly and will move from a pro-style offense to a spread.

The Irish will also have to make up for the loss of quarterback Jimmy Clausen and wide receiver Golden Tate. Clausen threw for 3,722 yards and 28 touchdowns. He had only four interceptions. Tate caught 15 of Clausen’s TD passes and compiled 1,496 yards.

Sophomore Dayne Crist will step in at quarterback and the new spread offense will help him succeed. Brian Kelly made the Bearcats the No. 4 scoring offense in the nation last season, and is looking to have similar success at Notre Dame.

Wide receiver Michael Floyd will fill the void left by Tate. He had a productive season in 2009, catching 44 passes for 795 yards and nine touchdowns. Tight end Kyle Rudolph will be a big target for Crist as well. He had 364 receiving yards and three touchdowns last season.

Running back Armando Allen will get the bulk of carries and has shown that he can catch the ball out of the backfield as well. He ran for 697 yards and three touchdowns in 2009 and added 216 yards through the air.

Brian Kelly brought along Defensive Coordinator/Inside Linebackers coach Bob Diaco. Diaco will hold the same duties at Notre Dame and is looking to improve the defense. As on the offensive side, with a new coach comes a new system. Diaco changed the 4-3 defense to a 3-4, a system that better fits the available players.

The three-man front is very experienced and has some serious talent in defensive ends Ethan Jones and Kapron Lewis-More as well as NT Ian Williams. Linebacker might be the deepest position at Notre Dame

Sophomore inside linebacker Manti Te’o had a great freshman year. He recorded 4.5 tackles for a loss and one sack and is looking to build on those numbers. Strong safety Harrison Smith led the team in tackles for a loss with 6.5.

The Irish will feel the loss of safety Kyle McCarthy, who lead the team with five interceptions, but they Jamoris Sloughter is ready to step in at free safety.

Kicker Nick Tausch missed three extra points last season. He made 14 of 17 field goal attempts, and missed one attempt respectively from 1-29 yards, 30-39, and 40-49. He didn’t try a field goal from 50+ yards. His longest successful attempt was from 46 yards out.

The Fighting Irish went 4-8 against the college football spreads. They were 27-34-1 under Charlie Weis. What’s more interesting, though, is new head coach Brian Kelly’s ATS record. He went 5-7 ATS with the Bearcats last season and 20-17 in his career as Cincinnati head coach.

Bet the Irish to win against Arm when the teams face off in New Yankee stadium. Notre Dame has come out on top in the last 13 meetings between the two teams. Their last loss to Army dates back to 1958.

At this point in the season Brian Kelly’s new offense should be clicking and the Irish should be able to continue the streak.

Fade the Irish at Michigan State in Week 3. They are 3-10 in road openers and have been outgained by 71 yards per game in the last four meetings. Notre Dame lost 23-7 last time they traveled to Michigan State.