The Phillies turn to their ace in the opening game of a crucial NL East series at Citizens Bank Park. 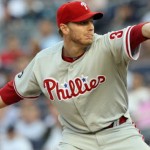 Atlanta comes into this crucial NL East showdown two games ahead of the New York Mets.  The Braves won all three series of its recently completed homestand, but it ended with a 3-2 loss to Florida on Sunday.  The loss was only the fourth in Atlanta’s last 24 home games and ended the club’s three-game winning streak.  The Braves now must leave their MLB-best 30-10 home record and head on the road.  Atlanta stands at 18-24 overall on the road (-650) and is 93-111 away from Turner Field over the last three years (-1,330).  The offense will find itself in a precarious spot this evening, managing to bat just .232 over the last seven games and .249 overall on the road this season.  Opposing pitchers from the NL East have also held the Braves to just 3.5 runs per game within the division.

Braves starting pitcher Derek Lowe is 9-6 with a 4.53 ERA in 17 starts (+160), but the club has dropped his last two outings against the White Sox and Nationals.  In those two games, the offense has provided him just two runs of support, while he has allowed four earned runs and 13 hits in 12.2 innings of work.  He brings an even 3-3 mark and 5.09 ERA in eight road starts, as he’s managed to strike out just three more batters than walks away from Turner Field (27K/24BB).  In 17 career appearances (13 starts) against the Phillies, the right-hander has a solid 7-3 record and 3.26 ERA (+30).  Lowe is 4-1 with a 3.03 ERA in six lifetime starts at Citizens Bank, managing to issue just five walks in 38.2 frames.

Philadelphia simply wants to hold on during the last week of play before the All-Star break, with numerous injuries plaguing the team.  Seven key players are currently injured, including none bigger than second baseman Chase Utley, who is expected to miss eight weeks with a left thumb injury.  Philadelphia took two of three in the first two series of the season between these two clubs and the Braves swept the Phillies a month ago.  The club stands at 20-15 in home games this season (-480) and carries a solid 31-21 mark at night into this nationally televised contest (+500).  The lineup has compiled a .299 on-base percentage over the last seven games, which has led to the team’s 2-5 record over that span.

Phillies starting pitcher Roy Halladay is 9-7 with a 2.42 ERA in 17 starts this season (-540), but is coming off an outing in which he allowed a season-high 13 hits.  In that contest, he picked up a 4-3 road defeat against the Cincinnati Reds, surrendering four runs and allowing two home runs in eight innings.  In three career appearances against the Braves, Halladay has gone 2-0 with a 0.46 ERA.  He pitched a 2-0 shutout over the Braves on April 21 at Turner Field.  The right-hander has enjoyed been successful in July over the course of his career, going 21-12 with a 3.31 ERA.

Bettors should focus on the total in this contest, with the Braves being 7-16 O/U within the division this season.  Philadelphia stands at 13-16 O/U against the NL East during the year, which is consistent with the team’s 77-90 O/U mark versus the division the last three years.