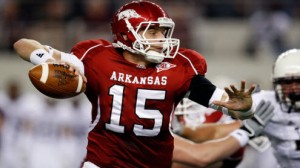 The Razorbacks have all the pieces in plays for a great offensive year with ten starters returning on offense. Quarterback Ryan Mallett flourished in Bobby Petrino’s system in his sophomore year in 2009. He threw for 3,624 yards and 30 touchdowns. And he was extremely careful with the ball, throwing only seven picks.

Mallett should be able to improve with another year under his belt and could put up even better numbers in 2010. Almost all of the main pieces of the high flying offense stay intact, and the Razorbacks should click even better.

Arkansas loses running back Michael Smith, who was second on the team in rushing last season and averaged 5.6 yards per carry. However, Broderick Green and Ronnie Wingo are ready to step in. Green did already get the bulk of the carries last year and scored 11 times.

Wingo had 49 carries for 319 yards and three touchdowns. He averaged 6.5 yards per carry and could take the starting job from Green if he can repeat those numbers.

The Razorbacks return their entire receiving corps, which combined for 2,490 yards. Juniors Joe Adams, Jarius Wright and Greg Childs had 19 touchdowns between them in 2009, and made opposing defenses look bad. All three of them combined over 16.5 yards per reception, with Adams leading the way at 19.6.

The offensive line will only lose guard Mitch Petrus who was picked by the Giants at 147 in this year’s draft. The offensive linemen have 90 starts between them and should be able to provide the protection and run-blocking to help the offense to another great season.

The Razorbacks’ defense had some problems last year, but they were dangerous at times. They combined for 13 interceptions last year, and they return seven of their 11 starters. They were prone to give up the big play and need to work on that to give the offense a chance to win.

The team loses 2009 co-sack-leader Adrian Davis. However, defensive end Jake Bequette, who shared the team lead with Davis at 5.5 sacks returns, and anchors the line in 2010. Eight defensive linemen who got starts last season return, and this part of the defense should be solid and improve in the pass rush.

The linebacking corps is led by Junior Jerry Franklin, who led the team with 94 tackles last season. He had 1.5 sacks and 3.5 tackles for a loss in 2009.

The secondary had some problems giving up big plays last season, but also grabbed its share of interceptions. They lose strong safety Matt Harris, who had 71 tackles and one interception in ten starts, and Jerrell Norton, who had 14 tackles in two starts.

The Razorbacks return seven players who got starts in the defensive backfield last season, and have more fresh bodies coming in. They are more experienced and look better than last year and should be able to improve.

Kicker Alex Tejada was nearly perfect on his extra points last season, but missed six of 22 field goals. He was perfect from under 29 yards, but missed two each from 30 to 39, 40 to 49, and 50+ yards.

Punter Dylan Breeding averaged 38.7 yards per attempt and forced 15 fair catches. He buried the ball within opponents’ 20-yard line 14 times. He had one punt blocked in 2009.

Punt returner Jerell Norton won’t be back with the team. He averaged 8.6 yards on only nine attmpts.

Kick returner Dennis Johnson returned 40 kicks for over 1,000 yards and scored one touchdown. He is back with the team and poses a dangerous threat on special teams.

The Razorbacks went an excellent 7-4-1 against the college football point spread in 2009 due, in large, to their high flying offense. Arkansas scored more than 40 points in seven games and had 56 points against Troy and 63 against Eastern Michigan.

Arkansas went 3-1-1 ATS as the home favorite, and 1-0 as the home dog. They weren’t favored on the road in 2009and finished 2-2 ATS as the away dog. They did well against SEC opponents going 5-3 ATS. They went 2-1-1 against the spread in non-conference games.

Bet the Razorbacks against the ULM Warhawks on September 11. The game was moved to Little Rock for attendance, and Arkansas is 26-0 against Sun Belt teams. They are 8-0 against the Warhawks, but had to rally from a 27-14 deficit to win in 2008. The high-flying Razorbacks offense will be too much for ULM and should be able to cover a likely high spread.

Fade the Razorbacks at Georgia on September 18. Arkansas is 3-9 against the Bulldogs and has lost nine of the last ten. They lead 21-10 last year, but ended up losing 52-41 despite five touchdown passes from Mallett. The Razorbacks are only 2-7 in SEC openers.