The Minnesota Twins (32-35) and Boston Red Sox (31-38) will meet up in an American League matchup Monday night at Fenway Park, with the first pitch scheduled for 7:10 p.m. ET

END_OF_DOCUMENT_TOKEN_TO_BE_REPLACED

The Los Angeles Dodgers (63-53) and Pittsburgh Pirates (64-51) will continue an important four-game National League series on Tuesday night at PNC Park, with the first pitch scheduled for 7:05 ET

END_OF_DOCUMENT_TOKEN_TO_BE_REPLACED

The Chicago Cubs (40-56) and Pittsburgh Pirates (54-42) will end a three-game National League Central series on Wednesday afternoon at PNC Park, with the first pitch scheduled for 12:35 ET

END_OF_DOCUMENT_TOKEN_TO_BE_REPLACED 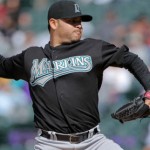 END_OF_DOCUMENT_TOKEN_TO_BE_REPLACED

The Phillies look to make it eight straight against the Padres, but must break a four-game losing streak during the day.

San Diego is looking to avoid losing three straight for the first time since getting swept at home by the Dodgers from May 14-16, but they’ve yet to drop three consecutive road games this season.  The Padres are still proud of entering the month with the best record in the NL for the first time in franchise history.  Much of the team’s success has been directly linked to a pitching staff that currently ranks second among all Major League teams with a 2.98 overall ERA, which also is third at 3.63 on the road.  The club is 10-8 during day games (+280) and a resilient 14-8 following a loss this season (+720).