Posted on July 25, 2012 by Jeff Mattinger in Baseball,Headlines

The Chicago Cubs (40-56) and Pittsburgh Pirates (54-42) will end a three-game National League Central series on Wednesday afternoon at PNC Park, with the first pitch scheduled for 12:35 ET 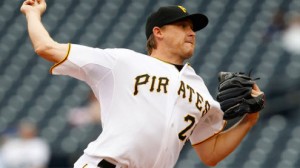 Chicago improved its record to 16-8 over its last 24 games with last night’s 5-1 road victory over Pittsburgh, as the starting rotation continues to provide the club with quality starts.  “For a month now, it’s been as good a starting staff in earned run average in baseball,” commented Cubs manager Dale Sveum.  Outfielder Alfonso Soriano has been one of the main contributors on the offensive end, going 4 for 8 with two doubles and four RBIs in the first two games of this series.  Chicago is 14-23 versus divisional opponents.

Cubs starting pitcher Ryan Dempster (5-4, 2.11 ERA) had his five-game winning streak snapped in his last effort, suffering a 4-1 road loss to the St. Louis Cardinals, allowing four runs and seven hits over six frames.  The right-hander is 3-2 with a 1.52 ERA in eight road outings, with opposing hitters batting .205 against him.  In 50 career games (25 starts) versus the Pirates, Dempster has garnered an 8-13 record and 5.39 ERA, including a 1-0 loss at this ballpark on May 25.

Pittsburgh is now 2.5 games back of the Cincinnati Reds in the NL Central, as the team is destined to lose its first series at home since May 21-23.  “We’ve got more work to do,” commented Pirates manager Clint Hurdle.  The Pirates will definitely start feeling a bit of pressure down the stretch, considering the franchise hasn’t reached the playoffs since 1992.  It’s important to note that the team hasn’t been swept at home since September of last year.  Pittsburgh is 21-12 in day games this year, with the “under” going 21-10 in those contests.

Pirates starting pitcher Kevin Correia (7-6, 4.31 ERA) has won a career-high four games in a row, including a 4-3 home victory over the Miami Marlins last time out, surrendering three runs and eight hits over five innings.  The right-hander is 3-2 with a 3.70 ERA in eight home starts, surrendering eight home runs in 48.2 combined frames.  In 13 career games (nine starts) versus the Cubs, Correia has registered a 3-4 record and 5.84 ERA,  including a no-decision effort in a 3-2 home win on May 26.

Sports bettors will likely back the Pirates due to their 6-0 record in Correia’s last six starts versus NL Central foes, while the Cubs are 4-9 in Dempster’s last 13 tries in that situation.