The Boston Red Sox (49-49) and Texas Rangers (57-39) will close out a three-game American League series on Wednesday night at the Rangers Ballpark in Arlington, with the first pitch scheduled for 8:05 ET 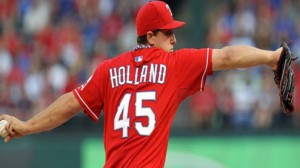 Boston ended its four-game losing streak by capturing a 2-1 road victory over Texas on Tuesday night, as the club evened its record and maintained its focus on making a potential run to the playoffs.  “I hope every win gets us rolling,” commented Red Sox shortstop Mike Aviles.  The Red Sox are now presented with a major challenge, as they’ve failed to win back-to- back road games since June 16-17.  Boston is 20-12 against left-handed starters, with the “under” going 16-14 in that situation.

Red Sox starting pitcher Josh Beckett (5-8, 4.53 ERA) is suffering through a forgettable 2012 campaign, which includes a 6-1 home loss to the Toronto Blue Jays in his latest effort, allowing five runs (four earned) and seven hits over six frames.  The right-hander is 3-3 with a 4.50 ERA in seven road appearances, issuing 15 walks and striking out 37 batters in 44 combined innings.  In nine career starts versus the Rangers, Beckett has compiled an even 3-3 record and 4.88 ERA.

Texas had scored 22 runs in its previous three games before plating just a single runner in last night’s loss, but it’s still important to note that the club could win its seventh straight series at home with a victory here.  The Rangers are 30-17 overall at this venue, winning 20 of their last 29 contests in front of the home faithful.  All-Star outfielder Josh Hamilton could be ready to break out of a recent slump, as he’s 8 for 17 with two home runs in his career against Beckett.  Teas is 8-6 as a home favorite of -125 to -150, with the “under” going 7-6 in that situation.

Rangers starting pitcher Derek Holland (6-5, 4.84 ERA) was handed a 6-1 road loss by the Los Angeles Angels in his last outing, giving up six runs and nine hits over 6.2 frames.  The left-hander is 2-3 with a 6.38 ERA in eight home appearances (seven starts), with opposing hitters batting .277 against him.  In four career games versus the Red Sox, Holland has garnered a 3-1 record and 2.57 ERA, including a 6-3 road victory on April 18.

Sports bettors will likely back the Rangers due to their 22-7 record in Holland’s last 29 starts as a favorite, while the Red Sox are 1-6 in Beckett’s last seven outings.