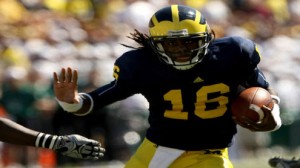 When it comes to looking for teams to get behind as a bettor in college football, there is one type I like most. There are the teams that everyone knows are good, and the ones that are really lousy, but there is only so much opportunity in those. What I really like is the teams that are likely to be solidly better than people expect them to be. The public is very quick to develop expectations for teams, and those expectations aren’t always grounded in truth. If you can spot teams that are better than the public perception of them than you can often find very attractive value. Here are five teams that we pegged as potentially under-appreciated by the public prior to the season and as we head into week 2 of the season it is interesting to note that these teams went 4-1 ATS in week 1.

Michigan – I really think that Michigan isn’t getting enough respect this year. The media is focusing on the many problems of Rich Rodriguez, the players that have left, and the problems of the last two years. Those are all issues, but beyond that this is a team with some things going for it. Denard Robinson has looked very good this summer and looks to be establishing himself as a solid starting quarterback. His receiving corps is strong, the running game is deep, and the offensive line should be acceptable. there are some issues on defense – especially in the secondary – but Craig Roh is ready to emerge as a star, and the whole front seven has some potential. The schedule sets up very well for them as well – especially early on. The consensus seems to be that 5 or 6 wins is what is n store. I think that eight wins wouldn’t be impossible. They are certainly better than last year.

Michigan State – The Spartans are seen as being a step behind the top teams in the Big Ten, but there is a chance that they finish at least third. A good chance. Kirk Cousins is a very good quarterback – the best in the Big Ten in my eyes despite the presence of Terrelle Pryor. He was mostly solid as a first year starter last year, and he’ll only get better this year. He protects the ball well, he’s accurate, and with only a few notable exceptions he did a very good job of avoiding mistakes. There is a lot of upside. He has the best group of pass-catchers in the league to throw to, and a solid running game as well. The defense should be good thanks to the return of stud linebacker Greg Jones – one of the top linebackers in the country. The schedule is reasonably good, too – they don’t have to leave the state of Michigan for their first seven games, and their non-conference schedule is laughably bad.

Tulsa – The attention in the Conference USA is all focused on Houston and freakish QB Case Keenum. They deserve the attention, but Tulsa isn’t far behind them. Like Houston they are driven by good QB play. In their case the star pivot is G.J. Kinne, a transfer from Texas who had a solid year last year in his first year playing. He’s obviously very talented – Texas recruited him heavily – and he showed a whole lot to like last year. He has eight of the nine leading pass catchers from last year back to help him move forward. The running game was brutal last year, but it should be much improved this year. The defense will be solid – thanks especially to a potent defensive line. This team is going to chase Houston hard. The two teams meet on November 13 in what could be a classic.

Kent State – They haven’t been in a bowl game in 38 years. When a team has a streak of futility like that it’s easy for the public to totally ignore them. That was the case with Temple for a long time, and as they improved last year there were real opportunities. Now it’s another MAC team that could provide the same opportunity. Kent State isn’t in any danger of busting the BCS, or probably even challenging for the conference title, but a bowl game this year is a very good bet. Spencer Keith was surprisingly good last year as a freshman QB, so there are high hopes this year for him. He has strong receivers and a very deep backfield. The defense, led by senior pass rusher Monte Simmons, is solid. This is the kind of team that could win eight games without anyone noticing. That’s ideal for bettors.

Arizona – So far the best thing you can say about head coach Mike Stoops is that his brother is a really good coach. The defensive-minded Stoops hasn’t had nearly the success at Arizona that he should have, but it’s quite possible that this year in a weak Pac-10 is when he’ll have his best year yet. Stoops did what he needed to do in the offseason when he shuffled his coaching staff to add some new life. I don’t love co-coordinators – which he now has one both sides f the ball – but any change is positive for this program. QB Nick Foles is talented, and all reports is that he has done the work needed to have a big year this year. He has talent around him, too. The conference is open for any team to step up and stake a claim, and it just might be Arizona.

Maddux Sports has started out the college football season nailing 75% of their picks for clients.  Get on board for a winning college football picks package today and start turning a profit!