The Phillies look to regain the top spot in the NL East division, but will have to fight off the Fish to get there. 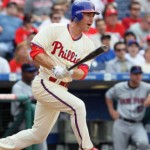 Florida gained a split in the Labor Day doubleheader and has actually gone 5-5 over its last 10 games.  The Marlins earned a 7-1 victory in the first game to improve their record to four games over .500 for the first time this year, only to drop the second game and fall to 70-67 at the end of the night.  “It’s a long shot, but we’re going to keep playing hard,” Marlins manager Edwin Rodriguez said about the team’s playoff chances.      The club is 4-3 in Philadelphia this season, but is trailing the season series 5-8 overall and own a all-time record of 131-149 against the Phillies.  Florida has a solid 32-28 mark against divisional foes this season (+360) and the total is 32-25 O/U in those contests.

Marlins starting pitcher Chris Volstad is an even 9-9 with a 4.82 ERA in 25 starts this season and is coming in on a three-game winning streak.  In those games, he has allowed nine runs and 20 hits over 19 innings of work, while the offense has provided 29 runs of support.  The right-hander is an even 5-5 with a 5.79 ERA in 12 road starts, surrendering 11 home runs in 65.1 frames.  He has posted an impressive 5-1 record in eight starts since the All-Star break, after going 4-8 before the Midsummer Classic.  In nine career games versus the Phillies, Volstad has produced a 2-3 mark and 3.99 ERA, including a perfect 2-0 record and 4.12 ERA in four outings at Citizens Bank Park.

Philadelphia sits just one-half game back of the Braves and will look to possibly sit atop the division alone for the first time since May 30, as the team has won 31 of 45 games.  3B Placido Polanco has led the team over that span, hitting .343 with 15 RBIs in the victories over that stretch, while posting a .157 average with two RBIs in the losses.  The Phillies are 26-23 against the NL East in 2010 (-160) and their 23 losses are the fewest among all teams in their division.  Of their 22 home series this season, the club has posted a 13-5-4 mark and is hitting .260 with 333 runs scored.  Philadelphia is an impressive 22-8 when playing against a team with a winning record in the second half of the season (+1,380).

Bettors may elect to play the road underdog in this contest due to the Marlins being 4-1 in Volstad’s last five outings versus the NL East, while the Phillies are 1-5 in Blanton’s last six tries against the division.