Posted on October 7, 2016 by Brett David Roberts in College Football,Headlines 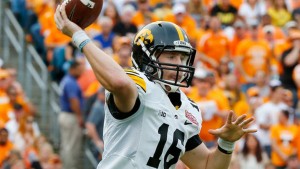 The Iowa Hawkeyes are 3-2 on the season following a Week 5 loss to Northwestern. Iowa fell 38-31 last week, but will attempt to get back on track as it travels to face Minnesota in more Big Ten action. The Hawkeyes are still 1.5 point underdogs to Minnesota, and the game will air at 11:00 AM (CT) on ESPN2.

Last week was not one of Iowa quarterback’s C.J. Beathard’s finest games. He did throw 19 of 27 for 204 yards, but he threw an interception and had just one TD pass despite the Hawkeyes generating sufficient passing yardage. Riley McCarron was his No. 1 target, hauling in eight passes for 78 total yards and the lone reception TD.

Iowa did rush for three TDs, but the Hawkeyes managed only 79 total rushing yards on 41 carries—good for just 1.9 yards per attempt. To compound these problems, Iowa also fumbled twice in the game, one of which was lost, to go with Beathard’s pick. The Hawkeyes will have to cut the turnovers to prevail against a tough Big Ten foe on the road this week. That is far from a given.

Beathard has been good this season, though. And while Iowa has slightly disappointed with two losses already, it is hard to lay all the blame on the Heisman candidate QB. He is approaching 1,000 yards on the season with nine TDs to his name and the two interceptions. Perhaps most problematic, however, is the fact he has incurred 14 sacks already through just five games. The Iowa offensive line has been poor at best, and it is holding back an otherwise talented unit. The lack of rush production last week was mostly attributable to this, too.

Beathard is completing 61 percent of his passes this year, but he has not attempted more than 28 in any single game (and thats was in the 42-3 drubbing of Iowa State in Week 2). The Hawkeyes accordingly rank just No. 96 in passing yards, while not faring any better with the rush (No. 94). Its defense has kept the Hawkeyes in games; Iowa ranks No. 21 in the nation allowing just 18.4 points per contest. Northwestern hanging 38 on them last week was simply too much to overcome after not allowing that much the previous two weeks combined. So, cutting turnovers and improving the defensive intensity has to be on the top of Iowa’s white board this week.

Its defense has kept the Hawkeyes in games; Iowa ranks No. 21 in the nation allowing just 18.4 points per contest. Northwestern hanging 38 on them last week was simply too much to overcome after not allowing that much the previous two weeks combined. So, cutting turnovers and improving the defensive intensity has to be on the top of Iowa’s “white board” this week.

So, cutting turnovers and improving the defensive intensity has to be on the top of Iowa’s white board this week.

The Minnesota Golden Gophers suffered their first loss after starting the season 3-0. Last week they fell to Penn State 29-26, as Saquon Barkley sealed the deal for the Nittany Lions on a 25-yard run in the first offensive play of OT. Mitch Leidner racked up 241 yards on 24 of 40 passing, but he averaged just six yards per attempt and did throw a pick. His passer rating was just 39.1.

Fortunately for Minnesota, they were able to get plenty going on the ground: Rodney Smith and Shannon Brooks each ran over 100 yards, and Brooks did it with just 14 carries (including a TD and a 37 yard run). Brian Smith did the damage as the No. 1 pass option, catching seven for 101 yards. Drew Wolitarsky also chipped in 69 yards on seven catches of his own, including Minnesota’s only reception TD.

Minnesota will have to improve its rush defense after allowing PSU QB Trace McSorley to run all over them, picking up 73 yards on just eight carries (while Barkley was no slouch himself). The Golden Gophers are giving up 26 points per game, ranking No. 56 in the nation, but its offense has been enough to emerge victorious three weeks of four. Minnesota is posting 36.3 points per game (tied for No. 44) and its rush attack is good for No. 27 in the country at 228.3 yards per game.

Expect this game to feature plenty of rushing, though with the over/under set at ’50’ there should be no shortage of scores.

This will be Big Ten football at its finest as two quality opponents jostle to improve their place in the conference standings.