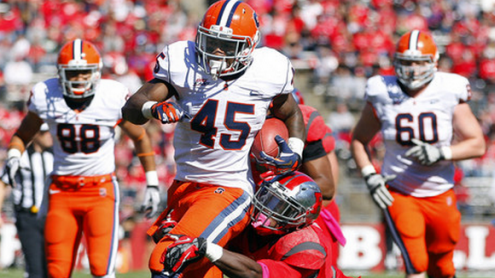 Syracuse improved to 1-1 in the ACC with its 24-10 victory over NC State last week on the road. The Orange rallied late, scoring 14 in the fourth quarter on an 18 yard TD Run by Prince-Tyson Gulley and an 8 yard run by Terrel Hunt. The Orange rushed for 362 yards in the game, while passing for just 74, which is even less than usual.

Syracuse relies heavily on the run, ranking 23rd in the nation in rushing yardage (220.7 per game), but Hunt can throw accurately when necessary. He completed 15 of 18 against Wagner on Sept 14 and was 16 of 21 against Tulane. Clemson was more or less a pure disaster (8 of 24 with three interceptions), but eliminating that tough game from Hunt’s resume improves it dramatically. He’s 43 of 63 on the season excluding the Clemson loss. Drew Allen shares QB duties and he’s thrown relatively well, too, with a 58.2 percent completion ratio.

The Orange have three capable ball carriers: the QB, Hunt; and Jerome Smith and Gulley. Smith has rushed for 482 yards on the season and has eight rushing touchdowns in addition to his one reception TD. Gulley has four rushing TDs and a receiving TD, as well. The Syracuse offense has struggled against the tougher defensive teams, and Georgia Tech does have a strong defense. It should be intriguing to see if the Orange try to mix in some more pass plays since their unilateral approach had so little success against other tough Ds.

The Georgia Tech Yellow Jackets have a design much the same as Syracuse’s, with the focus almost exclusively on rushing the football. The Yellow Jackets rank 6th in the nation in rushing yardage per game (290.3) and generate just 131 yards via the pass per game. The offense has been effective enough given their defensive strength this season, with Georgia Tech averaging 32.7 points per game and allowing 22.3

Vad Lee isn’t much of a passer (758 yards but just 42 percent completion ratio), but he is good at grinding out yardage and has 282 rushing yards on the year. David Sims has been the workhorse with 72 carries for 353 yards, but Robert Godhigh (254 yards), Zach Laskey (186) yards, and a host of other Yellow Jackets have taken their turn running the rock this season. The Yellow Jackets as a team have amassed 1,742 rushing yards.