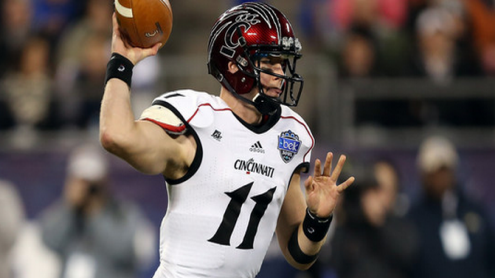 Cincinnati scored a big 38-20 win over Temple last week to improve to 4-2 on the season and this week the Bearcats will take on one of the worst teams in the AAC, UConn. The Bearcats are big 14.5 point favorites according to college football oddsmakers at 5dimes, and given the offensive success of the team against tough opponents, it would seem Cincy would be able to put up big numbers against Connecticut.

Brendon Kay was deadly accurate with his passing last week against Temple. He threw 31 of 37 for 270 yards with two TDs and no interceptions. Perhaps his most impressive numbers came in the 66-9 pouncing of Northwestern State, when Kay needed just 15 throws (13 completed) to reach 275 yards with 4 TDs and 0 INTs. Kay has grown a lot in his senior season and his 71.6 percent completion ratio ranks among college’s best.

Kay has a few options in the backfield: Ralph Abernathy, Hosey Williams and Tion Green. The trio has combined for nearly 1,000 yards, paced by Abernathy’s 327 yards on 74 carries. Cincy has the weapons to be a very good offensive team and is an underrated team in the AAC.

UConn just can’t generate offense. The Huskies average just 16.4 points per game and have averaged just 11 per game over their last two, losses to Buffalo and South Florida.

Chandler Whitmer has more interceptions on the year than touchdowns and he struggled badly last year with 16 INTs, too. UConn doesn’t really have any better options at QB, but Whitmer is capable of having good games. That just can’t be said when he’s thrown an interception every game this season.