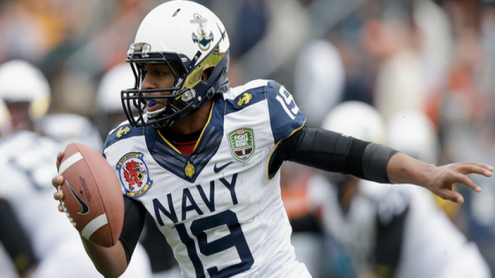 Navy came back to earth last week with a tough 35-7 loss on the road at Duke. The Midshipmen still sit at 3-2 on the season, but will face a tough test in Toledo this week. College football oddsmakers at 5dimes are setting the line 10-points in favor of the MAC school.

Navy relies almost exclusively on the run, but it’s been a moderately successful approach. The Midshipmen rank 11th in the nation in rushing yardage per game with 277 yards per contest, and most of that is accounted for by quarterback Keenan Reynolds.

Reynolds has thrown for 467 yards on the season but rushed for 416, and Navy has shared the ball with five backs with 120 yards or more on the season. The team has a 5.2 yard average gain, illustrating the great job done by the Navy’s line.

Toledo is coming off a big 47-20 win over Western Michigan on Oct 5. This game against Navy marks the first matchup in two full weeks for the Rockets. Toledo, much like Navy, is a team that prefers to keep the ball on the ground. The Rockets average 208 rushing yards per game and the offense generates 28.5 points per contest.

Terrance Owens has thrown for 999 yards on the season but has five interceptions to just four touchdowns. Owens has rushed for one touchdown to even the score, but the majority of the Rockets offense revolves not around QB Owens, but on back David Fluellen, who has rushed for 846 yards on the year with nine TDs. Fluellen averages 6.6 yards per carry and will seek to carry this Rockets team to victory as college football oddsmakers predict.