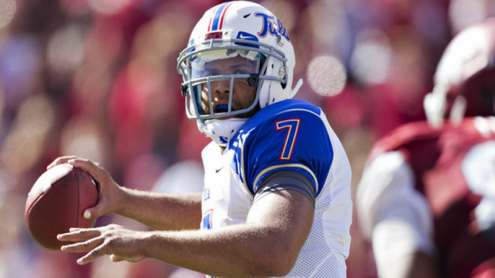 One of these teams will get its first Conference-USA victory of the season, and if college football oddsmakers at Bovada are correct, that team will be Tulsa, who is 9.5 point favorites on the road at UTEP this week. The Golden Hurricane are in bad want of a victory after having fallen the last three weeks, to then-No. 14 Oklahoma, Iowa State and Rice.

Last week was particularly heartbreaking as the Golden Hurricane lost in OT as Rice’s Taylor McHargue threw a game winning TD after a three-and-out by Tulsa’s offense. Trey Watts had his best game of the season with 165 yards and two rushing TDs and he now has 423 yards on the season and 4 TDs. Watts is a high-usage back and is consistent, averaging 4.8 yards per carry on 88 attempts this season.

Cody Green is building on a pretty solid 2012 when he threw for 2,592 yards with 17 TDs, but he’s throwing too many picks this season. Green already has five interceptions to pair with his five touchdowns, and his 52.7 percent completion ratio is a regression from last season’s 54.4 percent.

Green must be more accurate and avoid being picked, or it’s going to result in a lot of grinding it out with Watts. The pass offense does rank better than the rush (68th in the nation, 228.2 yards per game), but only because of lack of options in the backfield. The net result of both is that the Golden Hurricane offense has generated just 21 points per game, which is not enough to offset one of the worst defenses in the nation, one which allows 36 points per game. Only Colorado State failed to muster 30 against the Tulsa “D.”

Like Tulsa, UTEP is coming off of three consecutive losses. Unlike Tulsa, one of those was to Colorado State, who the Golden Hurricane beat. The Miners are 0-2 in conference play and have an even worse defense than Tulsa, allowing 38.4 points per game.

UTEP ranks 78th in the nation in passing yardage and an impressive 40th in rushing yardage, and the offense has been effective at putting points on the board with 33.4 points per game this year. But UTEP has benefited from playing some poor defenses and racking up a lot of points in lost causes. Aaron Jones is the featured back and is an effective one, with 467 yards on 84 carries, and four other Miners have rushed for at least 93 yards this season. Collectively, the team has 11 rushing TDs on the year and 10 via the pass.

Check out our paid pick plans for the 2013 NCAA Football season here at Maddux Sports!