Posted on October 11, 2013 by Brett David Roberts in College Football,Headlines 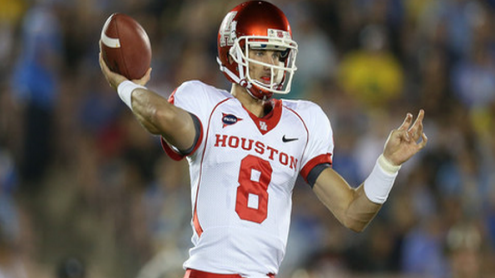 Houston has rolled through its easy schedule thus far and college football oddsmakers at Bovada predict much of the same as the 4-0 Cougars host 1-3 Memphis Saturday afternoon.

Last week, the Cougars had a bye, but on Sept 28 when the team was last in action, it defeated UTSA 59-28. The offense has been varied, and effective both via the air and the rush. The Cougars have averaged 534 yards per game over their first five contests.

John O’Korn has done a good job of running the offense and the QB has 933 yards on 63.5 percent passing, while also having rushed for an additional 51 yards on 19 carries. Most impressively, O’Korn has 10 TDs to just one interception, helping bolster his QB rating to a lofty 158.6.

O’Korn has four solid targets but his favorite has been Deontay Greenberry. Greenberry has 530 yards this season on 35 receptions and is tied for the team lead in receiving touchdowns (3). Daniel Spencer, Xavier Maxwell, Ryan Jackson, and Larry McDuffey have all combined for 51 catches between them.

In the backfield, several Cougars have had success, but the primary ball carrier has been Ryan Jackson with 384 yards on 69 carries. Jackson has three rushing touchdowns but also has two receiving TDs on the year, and Memphis will have its hands full with the talented back in this affair.

The Tigers lone win of the year came over Arkansas State on Sept 21 by a score of 31-7. In the other three contests, all losses, offense has been hard to come by. The Tigers are averaging just 15.3 points per game in their three losses while surrendering 23 points.

Paxton Lynch has been decent at QB, but the team isn’t getting in the end zone. Lynch has a 60.9 percent completion ratio, but has thrown twice as many interceptions as he has scored touchdowns (4:2).

One must wonder why the Memphis offense hasn’t geared more plays towards back Marquis Warford, who went absolutely nuts in the win over Arkansas State when he rushed for 173 yards on just 11 carries. Last week, he was ineffective against UCF, rushing for just 23 yards on 6 carries. Warford is a tiny 5’8″ 175 water bug, but Memphis has to get something going outside of the rolling pass plays Lynch runs.

Check out our 2013 college football paid pick plans at Maddux this season!