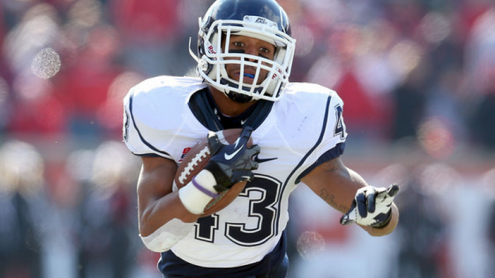 Last week brought triumph at last for a winless South Florida team as the Bulls improved to 1-4 by defeating Cincinnati 26-20. The Bulls were able to trace advantage of four Bearcat turnovers, in addition to blocking a field goal, forcing a missed extra point…

The Bulls were without their starting quarterback Steven Bench, but Bobby Eveld came in off the bench to complete 10-of-16 for 122 yards, no TDs, no INT. Bench is questionable for this week’s game, but he hasn’t been much more successful than Eveld, at any rate. Both rank in the low 40s for completion ratio, and the only thing that has been successful for the Bulls this season offensively has been back Marcus Shaw.

Shaw has rushed for 552 yards this season on 86 carries (6.4 yards per carry) and has two touchdowns. The Bulls also don’t have a lot of options for the QBs to air it out to, with only Andre Davis having double-digit receptions (17) on the season. The hope of staying with UConn this week will lie in the defense replicating the success it had against Cincy.

UConn is 0-4 on the season and lost badly to Buffalo last week 41-12. The Huskies stayed in, and almost beat, then- No. 15 Michigan on Sept 21, so the potential is there in this team, and college football oddsmakers recognize that spark as enough to defeat South Florida this week, with college football oddsmakers at Bovada setting the line 4-points in favor of the Huskies.

The offense has been bad all year for UConn, and rushing has almost been non-existent. The Huskies have averaged just 45.8 yards per game on the ground and the Huskies haven’t been scoring enough (18 points per game). The defense was good enough to hold the Wolverines to 24 points, and the most UConn has given up this season was 33 to Towsend, but it would stand to reason that they should fare well against a rather one-dimensional (and poor) USF offense.

Check out our paid pick plans here at Maddux for the 2013 NCAA football season!