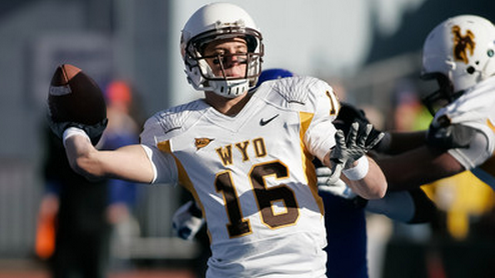 Wyoming is hoping to improve to 2-0 in the MWC with a win over New Mexico Saturday, a matchup which college football oddsmakers have set the odds two touchdowns in favor of the hosting Cowboys.

The Cowboys have had a very potent offense this season, even providing 34 and 21 points in the two defeats. The team averages 37.6 points per game, good for 32nd best in the nation and the pass is where the Cowboys do most of their damage, averaging 322.8 yards per game (14th in nation).

Junior quarterback Brett Smith has improved his accuracy even further from last season’s 61.2 percent, hitting 65 percent of his passes this year, and he has 14 TDs to his 4 INTs. Smith has a host of receiving options, which include: Robert Herron (30 receptions), Dominic Rufran (36), Tanner Gentry (27), Jalen Claiborne (18) and Brandon Miller (10).

In addition to the potent pass offense, the Cowboys have been effective with the rush, too, with Shaun Wick accounting for 362 yards and five touchdowns and Smith having rushed for 282 yards himself. Miller is primarily used as a back, with 47 carries for 238 yards, but did rank in the top-5 receivers, as mentioned. Wyoming has the potential to score a lot of points with their versatile attack.

New Mexico is much more one-dimensional: rush, rush, rush. The Lobos have the most rushing yards per game in the nation with 367.8, but the pass accounts for just 76 yards per game, ranking among the worst in D-1 football. The result is an offense which is still effective, generating 38 points per game, and the team uses a tandem of quarterbacks in a unique offense.

Clayton Mitchem has thrown 35 times this season for 200 yards (just 45.7 percent completion and Cole Gautsche has thrown for 187 yards (with an even worse 38.5 percent), but Gautsche has rushed for 403 yards on 56 carries and scored five rushing touchdowns. Mitchem has been less effective scrambling just 38 yards in 24 attempts, but the offense is reflective of a team that wants to keep the ball on the ground with 266 rushing attempts to just 62 pass attempts on the season.

Featured back Kasey Carrier has 685 yards on 107 carries and has 8 TDs on the season. Carrier had just 22 yards in the 49-27 loss to Pitt and just 54 yards in the loss to UTSA, and accordingly has an astounding 291 yards in the win over UTEP and 192 and 126 yards respectively in the matches vs UNLV and New Mexico State. Carrier could tear this game wide open and he has 57 and 68 yard runs on the season. Even so, a huge game from Carrier likely won’t be enough to overpower Wyoming with the poor performing New Mexico “D” which has surrendered 35.6 points per game against a schedule that isn’t particularly strong at all.

Check out our paid pick plans for the 2013 college football season here at Maddux Sports!