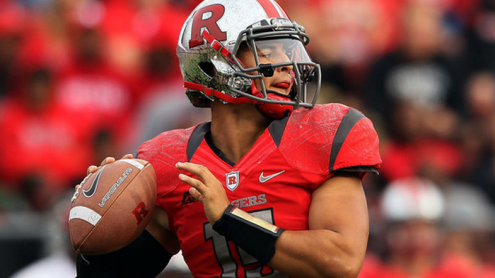 Rutgers is 3-1 and opens its AAC schedule with the 1-3 SMU Mustangs.

SMU has a very one-dimensional offense predicated upon the pass. The Mustangs rank nearly at the bottom of the nation in rushing yardage with 88.8 yards per game, but the team averages 330.5 yards via the pass. It hasn’t led to success. SMU has been outscored 90-20 over the last two weeks against Texas A&M and TCU, and the Mustangs enter the matchup against Rutgers as 4-point underdogs according to college football oddsmakers at 5dimes.

Garrett Gilbert is the arm behind the SMU offense and the senior is having his best season by far. Last year, he threw for 2,932 yards with a 53 percent completion ratio, but tis year Gilbert is already at 1,291 with a 63 percent ratio. In all but the 48-17 loss to TCU, he’s had 300-plus passing yards, so the Rutgers secondary will have to be ready for Jeremy Johnson, Darius Joseph and Keenan Holman, a trio who has combined for 96 receptions on the year.

Rutgers attack is far more balanced. The Scarlet Knights rank middle of the road in both passing yardage (67th) and rushing yardage (63rd), but the effective defense ranks 43rd, allowing 21.5 points per game. The Scarlet Knights have actually only allowed 10.3 points per game if the 52-51 shootout against Fresno State is omitted, so the strength of the defense can be more accurately gauged, in some respects; though, Norfolk State, Eastern Michigan and Arkansas are weaker opponents.

Gary Nova has built on a strong 2012 campaign and the junior Rutgers QB has thrown for 888 yards with a 58.7 percent completion ratio. Nova has thrown three INTs and has been sacked 8 times, but his QB ratio is still vastly improved over his sophomore campaign (125.8). This year he is at 148.9.

The Scarlet Knights will want to ensure victory before facing off against No. 7 Louisville next week on the road.