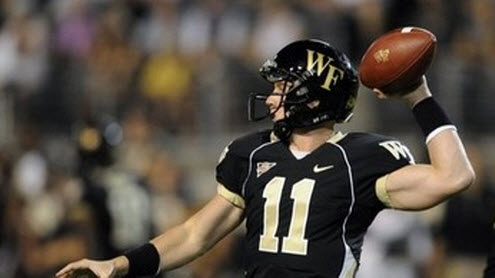 Thomas is in his junior season, and he threw for 2,662 yards as a freshman in 2010. This season, the 6’6″ standout is throwing 64 percent for completion and has amassed 906 yards. Thomas has also rushed for an additional 93 yards.

Matt Dayes and Bryant Shirreffs are the primary ball carriers and both have been reasonably effective. Dayes has 180 yards on 40 carries and Shirreffs has 122 yards on 24 carries. Dayes has a sore ankle but is expected to play.

Tom Creecy has rushed for 110, but is averaging just 3.1 yards per carry. The Wolfpack will look to exploit a Wake Forest defense that had been reasonably good this season until actually tested.

The Demon Deacons lost 56-7 to Clemson last week, but prior to the AP ranked showdown, Wake had not allowed more than 24 points in any game.

NC State is “more Clemson” than they are the caliber of the other lackluster opponents in the Wake schedule, and it will likely lead to Wake’s third consecutive ACC loss. Facing two more ranked opponents in the next two weeks will only compound these issues as the easy part of Wake’s schedule is over.

The Wolfpack have been very ineffective offensively despite having a good senior QB in Tanner Price. Price is hoping to revert to 2011 form, when he threw for over 3,000 yards with a 60 percent completion ratio, but thus far he is throwing 56.7 percent for completion and has been sacked 11 times. He was sacked 25 all of last season.

0-8 ATS vs teams with winning records; UNDER 4-0 in last 4 on turf; 0-4 ATS in last 4 after accumulating less than 170 yards passing previous game.