Posted on September 26, 2018 by Brett David Roberts in College Football,Headlines 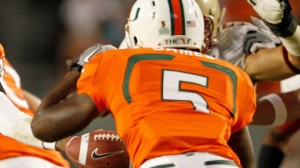 The No. 16 Miami Hurricanes improved to 3-1 last week with a 31-17 win over Florida International. This week, Miami hosts the North Carolina Tar Heels as 18-point favorites in NCAA football action on ESPN.

The over/under is set at 55.5 points according to college football oddsmakers at bookmaker 5dimes.

Last week in its 31-17 win over Florida International, the Miami Hurricanes dominated much more than the score would lead one to believe: Miami had 240 passing yards and 248 rushing yards, while its opponent mustered just 170 and 17, respectively. N’Kosi Perry threw 17 of 25 (68 percent) for 224 yards, three TDs, but had one interception. Travis Homer rushed for 114 yards and a TD on 13 carries, and Miami averaged 5.1 yards-per-carry on its 49 attempts. Miami also leapt from No. 21 in the AP rankings to No. 16 with the victory.

The Hurricanes did make a change in quarterback last week, as Perry stepped in for starting QB Malik Rosier. Rosier has thrown just 52.1 percent for completion with a 5:2 TD to INT ratio, while Perry is completing 66.7 percent of his passes with a better 6:2 ratio. Homer leads the way in the backfield with 276 yards on the season, but Rosier presents the best end zone threat from the QB position, leading the team with five TD rushes already.

Running back DeeJay Dallas has also rushed for 224 yards and a second-best 6.1 yards-per-carry. Lorenzo Lingard has averaged an outstanding eight yards-per-carry, but he has seen just 17 attempts all season. One thing is for sure, Miami has no shortage of rushing threats, but it must try to get the kind of passing it has managed to get from Perry, from Rosier. As it is, one offers a better arm, and one rushes better, but for Miami to make the next step it is going to need one of its quarterbacks to become a more complete player.

The North Carolina Tar Heels won its first game of the season in Week 4 with a 38-35 victory over Pittsburgh. Week 3 was canceled against UCF, and the first two weeks North Carolina lost to California and Eastern Carolina, successively.

Quarterback Nathan Elliot has thrown 59 of 104 (56 percent) for 669 yards, but he is averaging just 6.43 yards-per-attempt and has thrown more interceptions (4) than touchdowns (3). The brightest spots for UNC has been the play of running back Antonio Williams and wide receiver/running back Anthony Ratliff-Williams. Antonio has rushed for 257 yards and three touchdowns, while Ratliff-Williams has rushed just three times for 25 yards but leads the team with 11 catches for 230 yards and a TD. Only Dazz Newsome is a threat outside of Ratliff-Williams, and he has caught 11 passes for 132 yards but has not caught a TD reception yet this season.

Despite beating Pitt, North Carolina is likely on the verge of putting together another losing season: The signs just have not been there thus far for the Tar Heels.