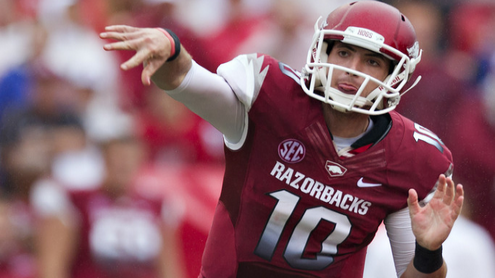 Southern Mississippi lost both weeks one and two, but week two was kind of a given since the team faced No. 22 ranked Nebraska. The defense gave up 479 yards, and Nebraska completed 19-of-28 passes in a game that was never close.

The Golden Eagles have had decent success with the pass early on this season. Allan Bridgford has completed 49-of-88 passes (55.7 percent) for 599 yards, thrown five TDs to only two INTs and has a 109.0 QB rating. The team will need to get more from the backfield, but Kendrick Hardy and Tyre Bracken should do an adequate job of carrying the ball. This week, however, all of the firepower of Bridgford and the backs likely won’t be enough. College football oddsmakers set the line 23 points in favor of the home team Arkansas.

Arkansas is 2-0 and began the season with wins over LA-Lafayette and Samford. They’ll square off against Texas A&M, Florida, South Carolina and Alabama after facing Rutgers next week, so it’s imperative for the Razorbacks to get this win against Southern Miss. It’s quite possible the team sits at 4-4 after October 12th, even after starting 4-0.

Brandon Allen has done a good job at QB for the Razorbacks. He’s thrown 24 of 39 for completion (61.5 percent) and has yet to throw an interception. His QB rating is an outstanding 180.3, and he has some rushers behind him to carry the ball if they need to keep it on the ground. Alex Collins and Jonathan Williams have rushed for a combined 580 yards and have three TDs between them. The dual-threat Razorback offense will likely be too much for Southern Miss’ “D.”

Check out our paid pick plans here at Maddux for the 2013 college football season!