Posted on September 13, 2013 by Brett David Roberts in College Football,Headlines 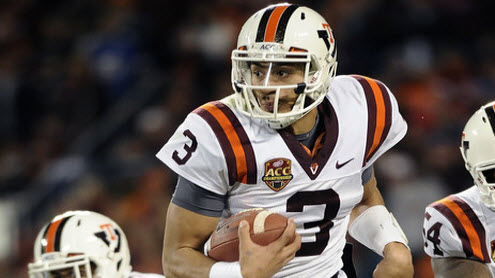 Quarterback Logan Thomas has struggled early on and is 22-of-57 (38.6%) on the season. It’s quite likely that the Hokies continue to rely heavily on Trey Edmunds in the backfield. He’s rushed for 200 yards in the first two games and had two touchdowns last week. Chris Mangus has been very effective, too, averaging nearly 10 yards per rush. Thomas has regressed as a quarterback since 2011 when he threw for over 3,000 yards with nearly a 60 percent completion ratio, but this team can be defined by their ability to rush the ball.

East Carolina has started the season a perfect 2-0 with victories over Old Dominion and Florida Atlantic. The Pirates have outscored their opponents 83-51, and they’ve done it on a great pass offense that ranks 22nd in the nation in passing yards (324.5 per game). QB Shane Carden has been on fire, and he’s thrown for 638 yards with a 79.7 percent completion ratio. His primary target has been Justin Hardy, who has 20 receptions for 227 yards.

If Carden and Hardy start connecting on long shot pass plays, East Carolina could very easily reverse this spread. Vintavious Cooper has also done an admirable job in the backfield, as basically the only ball carrier of consequence. Cooper has 133 yards over the two games, but only 26 yards come from the other 10 rushing attempts by the Pirates (Cory Hunter and Chris Hairston).