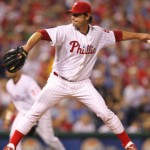 Braves starting pitcher Kris Medlen is 5-1 with a 3.01 ERA in 23 games (10 starts) this season (+870), including leading his team to seven straight victories.  The right-hander enjoyed a perfect June, posting a 3-0 record and 3.51 ERA and carried it over into his first start this month.  He allowed just a single run and six hits over 6.1 innings of work, failing to pick up a decision in the Braves 4-3 home victory over the Marlins.  Medlen has eight lifetime outings versus the Phillies, allowing 19 hits and seven runs in 12.1 frames.

Philadelphia still finds itself in third place in the NL East division and has struggled mightily in clutch situations.  The lineup is batting .212 with runners in scoring position the last seven games.  “When you’ve got a man on third with nobody out, you’ve got to score,” manager Charlie Manuel stated.  The Phillies dropped to 21-16 at home this season (-530), as they look to capture their sixth series victory at Citizens Bank park tonight (5-3-4).  The team has cost bettors a marginal amount of money at home with a moneyline of -100 to -125 this season (2-2, -20) and over the last three years (20-21, -360).

Bettors will definitely highlight the Braves 4-10 record in their last 14 road games versus a left-handed starter due to their struggles against tonight’s starter earlier this year.  Philadelphia has picked up the cash in four of Moyer’s last five starts versus Atlanta and the team is 37-17 in his last 54 starts against NL East opponents.