Both teams look to pick up a crucial series victory at Citi Field tonight. 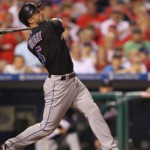 Cincinnati is focused on improving upon its 8-2 mark as a road underdog of +100 to +125 this season (+740).  “We have a chance to win the series and be 5-2 on the road trip before we get to Philadelphia,” manager Dusty Baker proclaimed.  “It’s a real big game for us tomorrow.”  The Reds will need to bounce back from being shutout by the New York Mets ace last night, posting a 4-3 record in games following such an occurrence this season (+120).  The club currently leads the division by a game over the second-place Cardinals, with the team never being able to extend its lead past two games.  Actually, Cincinnati hasn’t led the NL Central race by more than 2.5 games since May 18, 2002.  The Reds have won seven of their last nine road games and stand at 21-18 away from the Great American Ball Park this season (+520).

Reds starting pitcher Bronson Arroyo is 8-4 with a 4.25 ERA in 17 starts this season (+440), leading the team to a 3-1 record over his last four starts.  In that span, the right-hander has allowed seven earned runs and 18 hits over 26 innings of work.  He is a solid 5-2 with a 4.30 ERA in nine road starts this season (+600), with the Reds picking up victories in his last three starts away from the Great American Ball Park.  The offense has provided 21 runs of support in those outings, including 12 versus the Chicago Cubs last time out.  In his 17 starts overall, the Reds have gone 11-6 and scored 87 runs (5.12 rpg).  Arroyo is 6-2 with a 3.54 ERA in 10 career starts versus the Mets.  In his last nine starts against New York, he has produced a 6-1 mark and 2.54 ERA with three complete games and two more appearances of eight innings.

New York moved into position of possibly winning its seven straight home series with a 3-0 shutout victory over the NL Central-leading Cincinnati Reds on Tuesday night.  Starting pitcher Johan Santana provided a rest for the bullpen, tossing a complete game and retiring 27 of the final 33 batters he faced after a lead-off double by Reds second baseman Brandon Phillips.  “Santana was dealing,” Baker said after the game.  The Mets are 29-13 overall at Citi Field this season (+1,360) and have won 15 of their last 19 games here.  The club hasn’t dropped a series at home since losing two of three to the Washington Nations from May 10-12.  Expect an unpredictable outcome in the series finale tonight, with the Mets standing at an even 6-6 record after shutting out an opponent (-10) and 19-17 in this situation the last three years (-170).

Mets starting pitcher Jonathon Niese is 6-2 with a 3.62 ERA in 14 starts this season (+680), leading the club to victory in six straight outings.  Over that span, New York has outscored opponents 42-14, with the left-hander collecting wins in five of those starts.  He has been especially brilliant in his last two outings against Minnesota and Washington, allowing 10 hits and a single earned run in 13 frames.  He is 3-1 with a 3.19 ERA in eight starts at home this season (+660) and 3-2 with a 3.78 ERA in 12 career starts at Citi Field.  Niese made his only career start versus the Reds on May 5 of this year, lasting six innings and allowing 12 hits and four earned runs.