Posted on September 24, 2019 by Brett David Roberts in Headlines,NFL 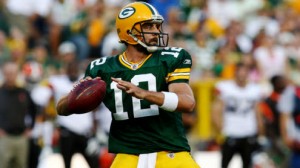 The Green Bay Packers are 3-0 after defeating the Chicago Bears, Minnesota Vikings, and the Denver Broncos. This week, in Thursday night NFL action, the Packers host the Philadelphia Eagles as 5-point favorites in a game with its point total set at 45.5, according to NFL oddsmakers at bookmaker 5dimes. The game will air at 7:20 PM CST Thursday on FOX.

So far, things have been pretty much status quo for the Packers. Aaron Rodgers is showing few signs of slowing down, as evidenced by his 61.3 percent completion ratio, 647 passing yards, and his four touchdowns (without a single interception). His passer rating is a rock-solid 96.5. Rodgers’ top targets have been Davante Adams and Marquez Valdes-Scantling. Adams has 198 yards on 15 catches but has yet to record a TD. Valdes-Scantling has 170 yards on 13 catches with one TD. The Packers have scored just four touchdowns via the pass while having rushed for three.

Needless to say, the team has been strong enough defensively that this paltry scoring suffices for three-straight ‘Ws.’ Aaron Jones leads the Pack in rushing yards with 174 on 46 carries (3.8 per). Jamaal Williams has rushed for 87 yards thus far, and Rodgers has just seven yards on his five carries.

The Packers average only 3.4 yards-per-rush while surrendering 4.9 yards-per to opponents. This must be seized upon and improved, or the hot 3-0 start will have looked like more of a mirage with that noticeable flaw regarding the rush attack. Jones has only rushed for a long-play of 15-yards, though he has picked up 10 first downs. The Packers are getting by because it has faced such poor opponents, but this week should be a real test with the spread set less than a touchdown.

The Philadelphia Eagles have lost two straight to fall to 1-2 after its Week 1 win over the Washington Redskins. Losses to Atlanta and Detroit have sent the Eagles back down to earth quickly. Though it lost to Detroit by just three points and the Falcons by just four, two losses are two losses, obviously. In the 24-27 loss to the Lions, Carson Went threw 19 of 36 for 259 yards and two touchdowns. He did incur three sacks for a total loss of 13-yards, but he still finished with a passer rating of 94.6.

The problem was that despite out-gaining the Lions in yardage, the red zone coverage was poor as was the efficiency of the Eagles while in their own red zone. Matthew Stafford had just 201 passing yards, and the rush was limited to 86 total yards, but the Lions were able to convert once the opportunities came. Kicker Matt Prater hit 2 of 3, with a long of 33-yards, but he also hit all three PATs, on touchdowns scored by Stafford’s passing and one via the rush by Kerryon Johnson.

Lions’ special teams’ performer Jamal Agnew was the star of the show in the loss, as he rushed a 100-yard kick return back for a touchdown, which essentially made the difference for the Lions in seizing victory.

The Eagles will turn its attention to the special teams in hopes of preventing a repeat disaster on a kick return.