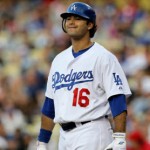 Mets starting pitcher Hisanori Takahashi is 7-4 with a 4.69 ERA in 26 games (10 starts) this season.  He suffered an 8-4 road defeat to the Giants last time out, surrendering six runs and seven hits over just 2.2 innings of work.  The left-hander is 3-2 with a 5.44 ERA in 11 away outings (six starts), allowing opponents to hit for a .311 combined average.   Takahashi picked up the victory in relief in a 10-5 home victory in his only career appearance against the Dodgers on April 27.  In that appearance, he allowed just a single run and two hits over 3.1 frames.  In his 10 starts this season, the Mets offense has provided him just 2.50 runs of support a game (6-4 O/U).

Los Angeles picked up a 2-0 shutout victory in the series finale against the San Francisco Giants last night, as bench coach Don Mattingly picked up his first managerial victory in Joe Torre’s absence.  “That’s what we needed,” said Mattingly.  “It feels good for the club.”  The Dodgers ended a six-game losing streak with the victory, but are still batting .247 and scored just 18 runs since the All-Star break.  Los Angeles moved its divisional record to 24-8, but now will need to improve upon its record against the NL East.  Los Angeles is 5-11 against Eastern foes this season, while posting a winning 17-15 mark against the Central.  The club is 5-2 on the season after picking up a shutout victory (+270), with the total being 3-4 O/U in those contests.

Dodgers starting pitcher Hiroki Kuroda is 7-8 with a 3.74 ERA in 18 starts this season, but has dropped two straight games due to lack of run support.  The offense has managed to be shutout in his last two outings, as the right-hander has allowed five runs and 10 hits over 13 innings in that span.  He is an even 3-3 with a 3.75 ERA in nine home starts, picking up 37 strikeouts and walking just 16 in 57.2 innings.  Kuroda is 0-3 with a 7.71 ERA in four career starts against the Mets.  New York batters are hitting .359 against him with four home runs.