The top two teams in the AL West start an important four-game series in Arlington tonight with a superb pitching matchup. 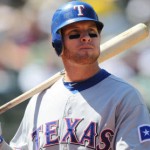 Los Angeles comes into this series having a chance to gain ground on the AL West Division leaders, as they currently sit five games back of the Texas Rangers.  “We’ve been sitting four, five games back for a while now,” tonight’s starter Jered Weaver said.  “When you’re playing those games, you pick up a game or lose one.  Simple as that.”  The Angels are now 4-2 since the All-Star break after dropping the series finale against the New York Yankees on Wednesday afternoon and the team is 7-10 this month (-380), after losing just nine games in June (18-9).  The team trails 3-2 in the season series against Texas, as four of the five meetings this year have been one-run affairs.  Los Angeles has dropped eight of the last 11 meetings in Arlington.

Angels starting pitcher Jered Weaver is 9-5 with a 3.16 ERA in 20 starts this season and picked up a 3-2 home victory over the Seattle Mariners last time out.  That game snapped a two-game losing streak, giving up two runs and six hits over seven frames while not issuing a walk and fanning five.  The right-hander is 5-4 with a 4.37 ERA in 11 road starts, managing to strike out 76 batters in 68 innings of work.  In four starts this month, Weaver stands at an even 2-2 with a 3.76 ERA, holding opposing batters to a .220 average.  In 16 career starts against the Rangers, he is 5-3 with a 3.62 ERA.

Texas lost for the first time in four games on Wednesday, failing to deliver a hit an eight opportunities with runners in scoring position, falling 4-1 to the Detroit Tigers at Comerica Park.  “It felt flat in the dugout,” outfielder Josh Hamilton said.  “That’s something we can’t do anymore.”  Still, the Rangers managed to take two of three from the Tigers and three of four games against the Red Sox to complete a successful road trip.  The club’s 50-31 mark since April 22 is the best in the Majors and the Rangers still have the third-best overall record in the American League.  Texas has a chance of providing some real separation in the divisional race, as tonight’s game is the first of 16 straight games against AL West teams.  The Rangers are 14-7 against divisional foes this season (+710) and 74-61 the last three years (+1,680).

Rangers starting pitcher Cliff Lee is 8-4 with a 2.59 ERA in 15 starts this season, including an 0-1 mark and 4.00 ERA in two outings since being acquired by trade.  The offense has managed to score just three runs in his first two starts, as the left-hander has allowed eight runs and 15 hits over 18 innings.  He is 3-2 with a 3.04 ERA in seven home starts this year, issuing just a single walk in 56.1 frames.  In nine career starts versus the Angels, Lee brings a solid 6-3 record and 3.18 ERA, including an 8-3 road victory on May 28 as a member of the Seattle Mariners.