Posted on September 4, 2014 by Brett David Roberts in Headlines,NFL 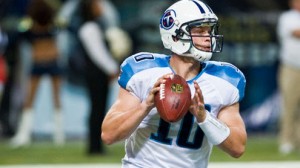 The Tennessee Titans have put together a 36-44 record over the last five seasons and were 7-9 last year. The team hasn’t won a postseason game since 2003. And once again, it finds itself staring up from the bottom with NFL oddsmakers not giving the Titans a chance to be remembered (sorry, it was too easy).

The fans, once restless, now no longer care at all. Ken Whisenhunt is trying to change the culture in Tennessee and says he wants a “smart, tough, disciplined” team.

The Titans made a ton of changes in hopes of revitalizing the franchise. The roster underwent an overhaul, as did the coaching staff. Weisenhunt will entrust the offensive coordinating duties to Jason Michael, but as to what the team is going to do is anyone’s guess really. Weisenhunt will help with the play calling as the team seeks to develop an identity.

QB Jake Locker is running out of time to prove he is an NFL starting caliber player. The team declined his fifth-year option and rightfully so. He’s missed 14 of 32 starts due to injuries, and it has impeded his ability to establish any kind of rhythm. Behind Locker, there are scant options in the form of Charlie Whitehurst and Tyler Wilson. It’s kind of do or die for Locker, and he realizes that.

Chris Johnson is no longer in the Titans’ backfield. Shonn Greene had a tough time with knee injuries last season, but the addition of Bishop Sankey should help tremendously. Leon Washington and Jackie Battle will be back, too. Dexter McCluster will get the chance to be more than a return man as he was in Kansas City, and he could thrive as a ball carrier this year.

The receivers are the strength of Tennessee’s offense. Kendall Wright is a monster and managed 1,079 yards on 94 receptions last year. Justin Hunter should improve in his second year, and he added 15 pounds of muscle to better endure hits and physicality. He showed great flashes last season, though, so the Titans are pretty pleased with that draft selection. Nate Washington and TE Delanie Walker will also be important to the receiving game, and Walker had 60 catches last year.

The OL made big changes over the offseason and will bring some experience to the field. It’s a good enough line to create holes for Greene, Sankey, Washington and McCluster. They’ll also do a good job at stopping pass rushers. if the offense flounders, it likely won’t be due to inadequacies in the line this year.

The Titans will go to a hybrid 3-4 scheme this season on D. Tennessee will look to be a lot more aggressive this season, though. The DL returns most of its defensive front, but will have to adjust to the 3-4. Jurrell Casey had 10.5 sacks last season, and he’s a big part of what the Titans are going to do on defense.

The LB corp is very good for Tenn. Former ends Derrick Morgan and Kamerion Wimbley will stand up a lot in the new scheme, and the outside is going to be pretty good too with Akeem Ayers and Shaun Phillips. Phillips’ experience will help the unit.

The secondary returns four of its top players from last season, but lost Pro Bowl CB Alterraun Verner. Third-year CB Coty Sensabaugh will likely replace Verner, but Blidi Wreh-Wilson will also be in the mix. Safety Bernard Pollard is a tough, physical player that helps the secondary tremendously.

The Titans had to replace kicker Rob Bironas, and Maikon Bonani will have a good shot at the role. Punter Brett Kern did well last season and is back in the fold. McCluster will help the return game. Leon Washington will return punts.

The Titans will be improved this year, but how improved is a matter of debate. The fan base is losing hope in Tennessee and needs the team to turn around before it can fill its 68,000 seat stadium again. Fanbases don’t remain forever loyal, and not having won a playoff game for 11 seasons can help alienate fans plenty. Locker has to stay healthy. If he doesn’t, he’s toast.