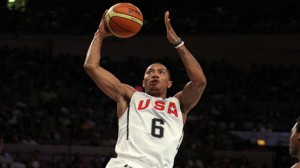 For a team with a lot of question marks going in, the Unites States has looked pretty convincing so far in the 2010 FIBA World Championships. After defeating Croatia 106-78, the U.S. beat Slovenia 99-77. But next up for the U.S. will be there toughest Group B opponent, Brazil. Brazil is also 2-0, beating Iran 81-65 and Tunisia 80-65. Let’s take a look at the game, odds according to Pinnacle and Bookmaker.

The U.S. definitely has the ability to be Brazil by more than 22, but they also have the talent to cover the spread against Slovenia, and that didn’t happen. From a U.S. standpoint, it all comes down to how much Coach K allows Kevin Durant to play. Durant only played 23 minutes against Slovenia, most of which was in the first half. The U.S. wasn’t nearly as dominant when Durant was on the bench. How much playing time Durant gets will determine whether or not this spread will get covered. It seems that Durant is being saved for the elimination round while many of the bench players are logging minutes to gain the experience needed for the elimination round.

In the exhibition games, the U.S. had trouble starting off games, now they have problems finishing them. The fourth quarter has proven to be a problem so far for the U.S..  They’ve let up more than 30 points in the fourth quarter in each of their first two games, so there is a concern that this team can start to give up on a game once it seems to be in hand.

Brazil is the second best team in Group B, behind the U.S, and they have shown so with their two victories so far. They would be much more of a threat to win this game if not for the injury to Anderson Varejao. Varejao sustained an injury in an exhibition game, and it is uncertain if he will play. Varejao could potentially give trouble to the U.S. with is size and NBA experience. The speedy Leandro Barbosa led the team with 21 points against Tunsia and has emerged as the team’s best player. Tiago Splitter, the 6’11 center, could give the U.S. some trouble with his size. Splitter had been effective in his first two games, scoring 13 against Iran and 16 against Tunisia. Even though Barbosa is one of the quickest players in the competition, Brazil will not be able to keep up with the U.S. if this turns into a fast-paced game. Instead, they should look to slow down the pace and try to work an inside game.

Overall, Brazil is the only team in Group B with any sort of chance of knocking off the U.S., so Coach K might not take this game as lightly as the first two. Still, the U.S. has not had strong fourth quarters which could become a factor. If Durant plays for over 25 minutes, the U.S. should cover. If not, it is likely that the U.S. will win this game by 15-20 points. If Varejao plays, that would also put some additional pressure on the U.S.