The Braves will look to improve upon their 18-1-2 home series record this season with the first of three games against the Mets at Turner Field. 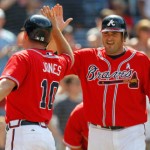 Mets starting pitcher Pat Misch is 0-3 with a 3.50 ERA in three starts this season and the offense has managed to provide just six runs of support in those contests.  He will be making just his second start away from Citi Field this year, dropping a 3-2 decision to the Astros two outings back.  The left-hander has made 31 road appearances (10 starts) in his career, posting a 2-4 record and 4.24 ERA.  In six career games versus the Braves, Misch brings an 0-2 mark and 10.22 ERA, but has an 0-1 record and 4.91 ERA in five games at Turner Field.  He suffered his worst start of his career in his last outing against Atlanta, giving up eight runs and seven hits in 1.1 innings on September 21, 2009 in an 11-3 loss at Citi Field.

Atlanta enters the first game of this three-game set with a two game lead over the Phillies in the NL East divisional race.  The Braves are coming off a dramatic 7-6 comeback victory over the Florida Marlins on Sunday afternoon, collecting their MLB-best 23rd win in the final at-bat.  “There’s not a better feeling.  It makes it better being in a playoff race,” catcher Brian McCann said of his game-winning home run.  He has a good chance of carrying over his recent success against the Mets, hitting .378 with three home runs and 12 RBIs in 10 games against them at Turner Field.  Atlanta has a losing 22-23 mark against left-handers this season (-740) and the total is 21-22 O/U in those contests.  It’s also important to note that the Braves are a solid 20-10 at home when the total is 8 to 8.5 (+320).

Braves starting pitcher Jair Jurrjens is 5-4 with a 4.36 ERA in 16 starts this season, but is coming off one of his worst career performances last time out.  He allowed seven runs and nine hits in just 5.1 frames in a 12-10 no decision loss in Colorado.  The right-hander is a perfect 5-0 with a 1.81 ERA in seven home starts this year, issuing just 16 walks versus 37 punch outs in 44.2 frames.  In five starts this month, Jurrjens has produced a 2-0 mark and 3.86 ERA in 32.2 innings, while surrendering just two big flies over that span.  He has made nine career starts versus the Mets, posting a solid 6-2 record and 2.62 ERA, but dropped a 3-1 decision in New York on April 24.  The fourth year starter gave up three runs and four hits over 6.2 innings in that contest.