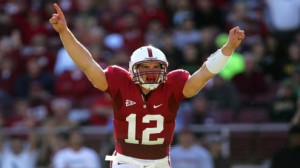 Over the month of July we will look at the top college football teams in the nation and preview 31 teams in 31 days. Here is team #28 and the 2010 Stanford Cardinal Football Preview.

The college football predictions for Stanford start with their offense.  The Cardinal will have to replace Heisman runner-up and now Minnesota Vikings running back Toby Gerhart. He ran for 1,871 yards last season and scored 28 touchdowns. Stepfan Taylor will most likely get the nod at running back for the 2010 season. The sophomore carried the ball 56 times last year for 303 yards and 2 touchdowns.

Stanford will rely heavily on sophomore quarterback Andrew Luck. He had a strong freshman season passing for 2,575 yards and 13 touchdowns. He had only four passes picked off. Luck showed that he can do damage on the ground too. He ran for 354 yards and two touchdowns and averaged 5.8 yards per carry.

The Cardinal have a great receiving corps led by Ryan Whalen. The senior caught 57 passes for 926 yards and four touchdowns last season. Chris Owusu had five touchdown catches and 682 yards. He averaged 18.4 yards per reception.

Junior tight end Coby Fleener is another great target for Luck. He averaged 12.7 yards per reception in 2009 and caught one touchdown pass. He totaled 266 yards on 21 receptions.

The Cardinal had major issues on defense in 2009. They finished 90th in the nation and changed their defensive coordinator. Vic Fangio will try to improve the defense by changing the system from a 4-3 to a 3-4.

Defensive end Thomas Keiser led the team in sack last year with nine. He will switch to outside linebacker. Owen Marecic, who started at fullback last season, will be a linebacker as well. Stanfords best defensive player might be junior linebacker Shayne Skov. He finished his true freshman season with 62 tackles, tied for third on the team.

The Cardinal have a solid secondary with safety Delano Howell and cornerback Richard Sherman leading the way. Howell intercepted two passes in 2009 and had 78 tackles. Sherman got two interceptions as well and had 62 tackles.

Kicker Nate Whitaker converted on all of his 53 extra points. He went 16-for-22 on field goals and was perfect from within 29 yards. Four of his six misses came on field goals between 40 and 49 yards, but he showed he can connect on long one, making a 54-yarder against Wake Forest.

Punter David Green was solid and averaged 41.2 yards per attempt. He forced 8fair catches and buried the ball inside the opponents’ 20 yard line 15 times. He had one punt blocked.

The Cardinal went 8-5 against the college football vegas odds last season. They have done well ATS under fourth year head-coach Jim Harbough. With Harbough at the helm, the team is 20-17 ATS. They went 4-2 as a home favorite in 2009, and 1-1 as an away favorite.

They were 1-0 as the home dog and 1-2 as the away dog. Stanford did great ATS in conference competition. They went 6-3 against the spread in conference-matchups. The Cardinal are 61-52-2 ATS in the last ten years.

Stanford shut out WSU 58-0 in 2008. The Cougars don’t have a strong defense and will struggle to keep the Cardinal offense off the board.

Fade the Cardinal at Arizona State on Nov. 13. The road team has struggled in this series and has lost nine of the last ten meetings. Stanford won last year, but was outscored 120-23 in the three meetings prior to that.

After last year’s win and with the “Big Game” against Cal coming up in the following week, the Cardinal could overlook ASU and suffer a road loss.