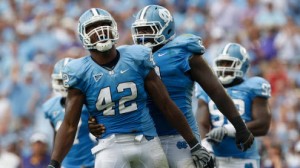 We have reached our top 20 college football teams in the nation and are getting closer to #1 in our 31 teams in 31 days feature.  Here is team #20 and the 2010 North Carolina Tar Heels Football Preview.

No, this is not the basketball preview. The Tar Heels will be a legitimate contender in the ACC in part thanks to returning ten starters on offense. Fifth-year senior quarterback T.J. Yates will lead the offense after a solid season. He threw for 2,136 yards and 14 touchdowns. He showed that he can be accurate with his 60.3 completion percentage. However, Yates needs to cut back on his interceptions. If the Tar Heels want to compete in the ACC and be one of the great college football betting picks, he can’t repeat his 15 picks from 2009.

North Carolina returns its top rushers and will have another strong year on the ground with Shaun Draughn and Ryan Houston once again leading the way. The tandem combined for ten touchdowns last year, and is looking for an even better 2010 campaign.

Houston ran for 713 yards and nine touchdowns in 2009, and Draughn added 596 touchdowns and one touchdown. Wide receiver Greg Little got 29 carries and averaged 5.7 yards per attempt. Senior Johnny White running back is also in the mix in the backfield. He ran the ball only 19 times last year, but averaged 7.5 yards per carry.

The Tar Heels receiving corps remains intact as well. Little was the leading receiver last year with 724 yards and five touchdowns on 62 receptions. Receivers Erik Highsmith and Jheranie Boyd as well as tight end Zack Pianalto are legitimate weapons in the passing game, and they will create tough matchups for opposing defenses.

Highsmith caught 37 balls for 425 yards and two touchdowns, and Boyd hauled in 12 passes for 214 yards and five scores. The Tar Heels’ offense features many weapons and will give opposing defensive coordinators a headache.

The defense is returning nine starters and should be able to repeat last year’s surprising numbers. They finished sixth in the nation in total yards allowed, and with the key pieces of the defense returning, there is no reason to expect a dropoff.

Defensive end Robert Quinn is looking to repeat his 11 sack performance that made him runner-up for ACC Defensive Player of the Year. Tackle Marvin Austin is a dangerous pass rusher as well. He contributed four sacks and two tackles for a loss to last season’s great defensive numbers.

Free safety Deunta Williams was the ball hawk on the team last season, and he is looking to repeat his six interceptions from 2009. Cornerback Kendric Burney had five picks last season and returns to the team as well.

Linebacker Quan Sturdivant led the team in tackles (79) and tackles for a loss (11) last season, and leads a strong linebacking unit. He will get help from Second Team ACC Bruce Carter, who had 65 tackles, two sacks, and 5.5 tackles for a loss in 2009.

The only concern for North Carolina is their depth. They don’t have many talented players ready to step in, should some of the starters get hurt.

Kicker Casey Barth had a solid season last year, making 21 of his 25 field goal attempts. He went 34-for-35 on extra points. Barth made four of his five tries from 40 to 49 yards, but missed three out of ten from 30 to 39 yards.

Punter Grant Schallock averaged 40.3 yards per attempt and forced 13 fair catches. He had one punt blocked, and buried the ball within the opponents’ 20-yard line 13 times.

Punt returner Da’Norris White scored one touchdown and averaged 14.6 yards per return. Johnny White and Greg Little split kick return duties and did a solid job. They averaged 20.5 (White) and 20.3 (Little) yards respectively, but didn’t get any scores.

The Tar Heels went 5-6 against the college football betting odds in 2009. They had a 2-2 record ATS as the home favorite and a 0-2 record when favored on the road. North Carolina did better as the underdog. They went 1-0 ATS as the home dog and 2-1 as the away dog.

The Tar Heels went 4-4 ATS against members of the ACC, and 1-2 in non-conference games. They are 18-16 ATS under fourth year head coach Butch Davis and 57-58 ATS in the last ten years.

Bet on the Tar Heels at Duke in their season finale on November 27. North Carolina has won six straight against Duke. They have won the last ten meetings in Durham, and they are 19-1 all time in the series.