The Los Angeles Dodgers (61-52) and Miami Marlins (51-62) will continue a three-game National League series on Saturday night at Marlins Park, with the first pitch scheduled for 7:10 ET

END_OF_DOCUMENT_TOKEN_TO_BE_REPLACED

The two division rivals have been involved in low-scoring affairs the last nine meetings. 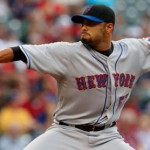 Atlanta has pushed its lead in the NL East standings to six games with its current five-game winning streak after shutting out the New York Mets 3-0 at Citi Field on Saturday afternoon.  “It’s good to be in first place going into the break,” said manager Bobby Cox.   The Braves are now a season-high 17 games over .500 for the first time since the end of the 2005 season.  The latest win pushed its daytime record to 18-11 this season (+660) and the total moving to 16-13 O/U with just four runs posted on the scoreboard.  Atlanta is averaging 5.6 runs per game offensively while holding teams to 4.2 runs with a combined .238 average.  The club is 17-14 versus the division this season (+10), but a dominating 13-3 in their past 16 meetings.

END_OF_DOCUMENT_TOKEN_TO_BE_REPLACED

The second installment of the Subway Series takes place at Yankee Stadium this weekend.

The New York Mets come into this series as the hottest team in baseball, after picking up a sweep of the Indians with a 6-4 victory on Thursday night.  “We’re doing a lot of good things,” manager Jerry Manuel said.  Much of their recent success has come against two of the worst teams in the American League (Baltimore and Cleveland), but now the degree of difficulty goes up with 10 straight against the Yankees, Tigers and Twins.  “Right now, we can play with anybody,” shortstop Jose Reyes commented.  “Right now, we’re playing very good.”  OF Jason Bay will be a key player in the series, going 7-for-10 with two home runs versus the Yankees in May.  He is batting .402 with five long balls and 23 RBIs in 25 games against the Bronx Bombers since the start of the 2008 season.  The Mets are 8-1 during interleague play this year (+790), with the eight victories being the most in the majors.

END_OF_DOCUMENT_TOKEN_TO_BE_REPLACED

The Mets have picked up back-to-back shutouts in the first two games of this series.  Philadelphia hopes SP Cole Hamels can continue his May dominance and lead them to victory.