The Cincinnati Reds (52-41) and Atlanta Braves (53-40) will continue a four-game National League series Saturday afternoon, with the first pitch scheduled for 4:05 p.m. ET

END_OF_DOCUMENT_TOKEN_TO_BE_REPLACED 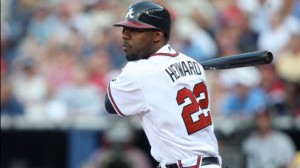 END_OF_DOCUMENT_TOKEN_TO_BE_REPLACED

Baseball is such a great sport. People who don’t get it and don’t love it will complain that the season goes on two long, that the players aren’t really athletes, or that it’s boring and uncompetitive. Those people just aren’t willing to embrace baseball for what it is – a factory for strange and amazing sights. There are three things that happened yesterday in the games that are a perfect example of why this game is so great:

Jason Heyward – This guy is one of those rare guys who comes along who is ridiculously hyped and still lives up to it. The guy is being held up as the next great hitter in baseball, and the savior of the Braves. After a couple weeks of watching him play I am not doubting it. Last night, after a slow start, Heyward hit an absolute moonshot of a homerun in the ninth to allow the game to go into extra innings where the tam won it. The guy is 20 years old, but he plays like he has been in the league for a decade. If this guy is as good as he is now then watching him for the next decade is going to be a very sweet treat. 16 RBIs in his first 14 games. Not bad, I guess.

Nate McClouth – More with the Braves. The former Pittsburgh star who moved to the Atlanta last year started this season with an ugly slump. He picked a great time to break out of it, though – his home run in the 10th inning won the game. He was obviously thrilled about it – he was pumping his fist until second base and took off his helmet rounding third. He was obviously expecting home plate to be crowded – it always is with a walk-off. When he rounded third and looked up, though, he saw that not only was anyone waiting for him, but the entire dugout was empty. To give him a hard time, the whole team left and was hiding in the tunnel waiting for him. Hilarious. The look on his face – pure confusion – was absolutely priceless.

Padres – There are so many games every day, and so many intricacies to the game, that anything can happen any time, and at least a few odd things happen every day. The Padres were playing the Giants, and they couldn’t get anything going at all. Jonathan Sanchez allowed just one hit in seven innings while striking out 10, and Sergio Romo shut the door with one perfect inning of relief. On virtually any day the Padres would have lost that game by daylight. This time, though, they won it. The lone hit was a single in the fourth by Headley. He stole second, advanced to third, and scored on a sacrifice fly. The Giants had six hits and two walks, but they couldn’t match the production and they lost. Bizarre game. Great game.