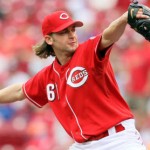 Atlanta was led by rookie outfielder Jason Heyward in capturing a 6-4, 10-inning win over the Reds on Friday night at the Great American Ball Park.  “That at-bat Heyward had – you’re 20 years old, you’re not supposed to be doing stuff like that against one of the better closers in the game,” catcher Brian McCann said after the game.  Despite the win, the Braves are still just 25-30 on the road this year (-640) and the total is 27-25 O/U in those contests.  This afternoon will be the eighth game of a three-city, nine-game road trip that has produced a 3-4 mark thus far.  The club is a dominating 18-8 against the NL Central this season, while the team is 13-10 against the West and an even 19-19 against its own division.  Atlanta is 13-10 in July this season and 39-36 during the month the last three years (-560).  The Braves have still lost five of their last nine games and are 6-5 in their last 11 overall.

Cincinnati sits a half game back of the St. Louis Cardinals in the NL Central race and will be playing in front of sell out crowds the entire weekend.  The Reds have had just 50 sellouts in eight seasons at the Great American Ball Park.  The club knows they need to pick up as many wins as possible against the Braves this weekend to keep pace in the division.  “You know what?  I think we’ll come in Saturday and keep pushing and give a good effort,” All-Star first baseman Joey Votto said.  He leads the National League in hitting (.326) and home runs (27), while ranking third with 72 RBIs.  Cincinnati has compiled a 13-12 record this month (+60) and the total is 12-12 O/U in those contests.  The Reds are also 9-7 when playing on Saturday this year (+160) and 31-38 on this day the last three seasons (-580).

Reds starting pitcher Bronson Arroyo is 10-6 with a 4.21 ERA in 21 starts this season, but has dropped his last two outings.  In those games, he has allowed 10 earned runs on nine hits over 13.2 innings, allowing three home runs over that span.  He is 4-3 with a 4.61 ERA in 10 home starts this year, but has issued 27 walks and struck out just 29 batters in 66.1 frames.  In eight daytime starts this year, Arroyo stands at an even 3-3 with a 3.71 ERA.  The veteran right-hander will be making his 13th career appearance (12th start) against the Braves, producing a 5-3 record and 5.90 ERA in those outings.