Posted on November 22, 2014 by Brett David Roberts in College Football,Headlines 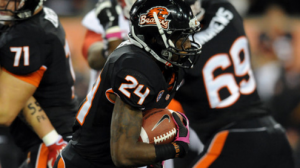 Oregon State is 5-5 on the season and 2-5 in Pac-12 play and will travel to Washington to take on a 6-5 Huskies team. Washington will be 6-point favorites in college football point spreads found on Bovada.

Washington has dropped its past two straight to ranked foes UCLA and Arizona. Last week against Arizona, the Wildcats’ Casey Skowron put Washington away with a 47-yard field goal as time expired. Washington led 26-21 going into the fourth, but failed to score in the final period.

Even so, Washington had more total yardage than Arizona (504 to 375) and got 245 yards from its backfield. Dwayne Washington had 148 yards and two TDs, while Deontae Cooper contributed an additional 38 yards. QB Cyler Miles threw 20-of-29 for 223 yards, but failed to record a TD. Marvin Hall threw a 36 yard pass for a TD, though.

Washington has rushed for 420 yards on the season, behind both Lavon Coleman (469) and Shaq Thompson (456). Shaq does lead the group in TDs, though, with six. Little used Jesse Callier is second on the team in TDs with four on just 19 carries, but he hasn’t played since Sept 6 after sustaining an Achilles injury that ended his season.

Prior to last week’s 35-27 victory over Arizona State, Oregon State had lost its past four. The improbable victory took Arizona State from No. 6 in the NCAA rankings to No. 13, so it was a big win for Oregon State.

For Oregon State, the victory was big. Though just 2-5 in Pac-12 play, it will provide a positive note before getting destroyed by Oregon Nov. 29 to conclude its season.