Posted on October 7, 2014 by Brett David Roberts in Baseball,Headlines 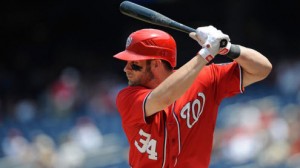 The Washington Nationals stayed to see another day after winning game 4. Gio Gonzalez will try to extend the series to a game five against a San Fran Giants team he’s thrived against. Gonzalez and the Nats will face Ryan Vogelsong. Given his dominance against the Giants, MLB oddsmakers are confident that will continue to be the case, setting the line 1.5-points in favor of the series trailer.

Prior to game 3, the Nats recorded 21 straight innings without a run. Yesterday that spell was broken as Washington won 4-1.

The Nats scored two runs on a Madison Bumgarner mis-throw and Bryce Harper banged his second homer of the series in the 9th inning, and the Giants 10-game winning streak in the postseason was snapped.

Gonzalez wasn’t overly impressive in the regular season, going just 10-10 with a mediocre ERA of 3.57, but he ended the season well, holding opponents to three ER or less in his last seven outings, while compiling a 4-1 record over those starts with a far more impressive ERA of 2.36. That recent success is largely why the Nationals have -134 odds to win the game according to MLB oddsmakers at Bovada.

Gonzalez struck out 27 with just three walks over his last four starts, but he didn’t face the Giants all season. He’s 1-0 vs the Giants since 2011.

Three Giants in particular have struggled against Gonzalez, as Hunter Pence, Pablo Sandoval and Buster Posey have combined to go 5-of-36 against Gonzalez, while Brandon Crawford has experienced success, going 2-of-6 with a HR and two RBIs.

The Giants have only hit .159 with runners in scoring position over the last two games. Over that stretch, Crawford, Joe Panik and Gregor Blanco have combined to go 0-of-29.

Vogelsong has been the victim of poor run support. Despite posting a 4.00 ERA< he finished just 8-13 and in the last month he’s been far less effective, throwing for a 5.53 ERA and losing all four decisions. In 2012, he went 3-0 in the postseason with a 1.09 ERA. He’s 1-2 with a 7.94 ERA in his five starts against the Nats, and he gave up nine runs in 11 1/3rd innings in the two matchups this season, both of which the Giants lost.