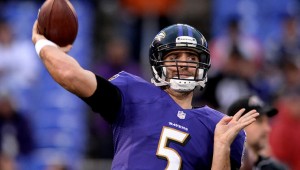 The Pittsburgh Steelers are 1-1-1 after winning its first game of the season in a 30-27 triumph over the Tampa Bay Buccaneers last week. Pittsburgh now hosts the Baltimore Ravens in Week 4 as 2.5-point favorites in a 7:20 PM (CT) game on NBC. The over/under is set at 51 points according to NFL oddsmakers at bookmaker 5dimes.

Last week, the Steelers won as quarterback Ben Roethlisberger threw for 353 yards and three TDs in a Monday night victory. He did throw one interception and suffer three sacks for a loss of 18 total yards but boasted a 120.7 passer rating, and Ryan Fitzpatrick of Tampa Bay came down to earth after his extra-worldly season beginning, instead this time throwing three picks and getting sacked three times for 19-yards lost.

Pittsburgh also got 61 rushing yards from second-year running back James Conner, who also caught five passes for 34 yards. JuJu Smith-Schuster led the Steelers in receiving yards with 116 on nine catches (11 targeted passes) and Vance McDonald added another 112 yards on just four catches, including a long-catch of 75 yards and a TD.

The Steelers rank No. 2 in the NFL in passing yardage at 363.3 per game, but its rush attack is less potent at just 90.0 yards per game. With its top backfield performer performing so many pass options, it is easy toes why, and Pittsburgh overall ranks No. 7 in scoring at 29.3 points per game.

The Steelers have struggled defensively, however, giving up 30.0 points per game and especially struggling to slow pass offenses, ranking fifth-worst in the league by allowing 288.0 yards per game. Its rush defense ranks No. 25 in giving up 122.3 yards per game. Week 2 the Steelers gave up 42 points to the K.C. Chiefs, resulting in a loss as its own 37 points was stellar but not enough with the porousness of its defensive attack.

The Ravens rank No. 5 in the league in scoring at 32.3 points per game while possessing the No. 7 defense which gives up just 17 points per game. Last week it held Denver to just 14-points, and in Week 1 it limited Buffalo to a mere field goal. With a strong defense, it should be able to force Pittsburgh into some sets other than its frequent pass plays, perhaps, as the Baltimore Ravens seek to milk the most out of quarterback Joe Flacco again.

Flacco has thrown 82 of 129 (63 percent) for 889 yards and six TDs with two interceptions and seven sacks incurred. His passer rating is 92.8, and John Brown has been the No. 1 receiver with 222 yards on 12 catches (23 targeted passes). He also leads in touchdowns with two and plays for 20-yards or more (four). Michael Crabtree has been a steady veteran influence and has 155 yards on 15 catches, with one TD and eight first downs.

Willie Snead IV has caught 12 passes for 142 yards, and a TD, with a team-best nine first downs. The Steelers, though, average just 3.1 yards-per-rush with leading rusher Alex Collins good for just 3.4 per attempt. Lamar Jackson has been used as a running back more than a QB thus far after coming out of Louisville last season in the NCAA. He has nine rush attempts for 45 yards but has thrown just four passes (resulting in one 25-yard completion).

Undoubtedly, Jackson is viewed as an eventual successor for Flacco, but if he becomes known as a No. 2 back eventually, Kenneth Dixon and Javorius Allen may see fewer and fewer touches throughout the season. Neither has been at all effective, with Dixon averaging just 3.4 yards per attempt and Allen good for only two per. Baltimore has been so strong offensively, that all this tinkering can wait as it looks to knock off Pittsburgh as underdogs in week 4.