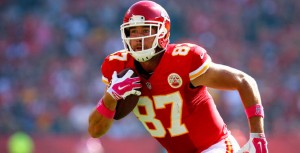 The Kansas City Chiefs are 3-0 and 1-0 on the road where it faces the Denver Broncos in week 4. Kansas City is 3.5-point favorites in the game, which will air at 7:15 PM (CT) on ESPN. The over/under is set high at 54.5 points according to NFL oddsmakers at 5dimes.

Kansas City thus far has been the most volatile offense in the NFL, leading the league in scoring at 39.3 points per game. The pass offense ranks No. 7 at 295 yards per game, and its rush attack is just better than the median at 103.3 yards per game. It has allowed Kansas City to get by with he league’s fourth-worst defense, surrendering 30.7 points per game. It has allowed 28, 37, and 27 points through three weeks, but won all three matchups to lead the AFC West standings. A win over Denver would extend that lead to two-games this early in the season.

The Chiefs have started rookie Patrick Mahomes, and he has been sensational. Mahomes is 62 of 93 (66.7 percent) for 896 yards, 13 TDs and not a single interception. He has been sacked just 1.33 times per game for a total loss of only 11-yards. Mahomes has a passer rating of 137.4 and a 14 percent TD ratio. Tyreek Hill has 310 yards on 14 catches with three receiving TDs. He has rushed four times for nine yards, while Kareem Hunt leads the Niners in attempts (52), yardage (168) and Touchdowns (2). Travis Kelce is the No. 2 receiver with 229 yards and two touchdowns. Sammy Watkins has rushed just three times (for 51 yards, including a 31-yard attempt) but ha 14 catches for 176 yards, a TD, and two plays for 20-plus yards. Between Hill, Kelce, and Watkins, the Chiefs have managed 31 first downs, and Watkins and Hill have each rushed for two first downs. Kansas City can move the chains.

The Broncos are 2-0 at home this season and will look to remain undefeated against its divisional foe. Denver has been great rushing the football at 144.7 yards per game, but it ranks just No. 20 in scoring at 20.3 points per game. Meanwhile, the Broncos surrender 23.3 points per game while being responsible for the No. 21 ranked pass defense and the fourth-best rush defense. Teams look to air it out against Denver’s mediocre secondary, while its tacklers do their job to stop the run. The Chiefs will obviously operate in that respect, as perhaps the perfect offense to take it to Denver. Mahomes could have a monster week.

Denver also may be without cornerback Tremain Brock, which could only expose it more. Brock left practice on Saturday and is listed as doubtful. The Broncos also could be without Brandon Marshall (knee) and cornerback Adam Jones (thigh)—while also being likely to be without safety Dymonte Thomas. Mahomes might set his personal record against a battered Broncos’ secondary which will feature plenty of inexperienced players.

62 percent of bettors at Covers expect the Broncos to lose as Kansas City now faces what could be the league’s weakest secondary, as the No. 2 pass offense. This one could get ugly.