Posted on October 2, 2016 by Brett David Roberts in Headlines,NFL 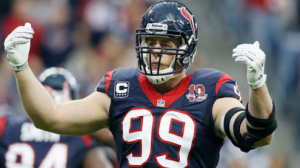 The Tennessee Titans fell 17-10 last week to the Oakland Raiders to land at 1-2 on the young season. Tennessee will travel to face the Houston Texans as 4.5-point underdog according to NFL oddsmakers at 5dimes. The game will air at Noon (Central Time) on CBS and has an over/under set at 40 points.

Last week, turnovers were a problem for the Titans. Three turnovers and Oakland’s David Carr throwing for 249 yards proved to be too much for Marcus Mariota and company. The second-year Titans’ QB threw for 214 yards on 17 of 33 passing, but had no touchdowns and threw two picks.

The Titans did rush well, with DeMarco Murray going for 114 yards on 16 carries, good for a 7.1 yard per carry average, including a 36-yard rush. Derrick Henry picked up 45 yards on 10 carries, and Mariota had 22 yards on three attempts.

Tennessee has to be more careful with the football, especially considering Mariota has two INTs and two fumbles (one lost) in the same contest. Tennessee was also mediocre defensively, recording just one sack and one tackle for loss. Avery Williamson picked off a Carr pass.

Punter Brett Kern was very good with six punts going an average of 51.8 yards, three pinned within the 20-yard line, and a long of 62-yards. It might be a good sign given Tennessee will be punting a lot this season, it looks like.

Mariota is having a good season, but a lot of it has been bolstered by Tennessee’s Week 2 win over Detroit. That week Mariota threw for 238 yards on 25 of 33 passing (75.8 percent) while scoring two TDs with one interception. Mariota has been intercepted at least once each week, and his passer rating last week (46.8) was the lowest of 2016.

Even so, his completion percentage of 62.8 percent thus far is good, and he was stunted by only appearing in three contests his rookie season due to injury. Mariota has the tools to be one of the best quarterbacks in the NFL, but the Titans still need to put more talent than just Murray around him. Tennessee may be on the rise, but the Texans have some tools that still render them the better football team and also the favorite in this game.

Houston began the season by winning in Weeks 1 and 2 over the pitiful Chicago Bears and Kansas City Chiefs. Week 3 brought a 27-0 shutout to the New England Patriots, but the Texans hope to rebound this week back on their home field.

Brock Osweiler has not been particularly good at all. His completion percentage hovers below 60 percent and he is averaging just 6.4 yards per attempt this season while having been intercepted four times and sacked six already. His passer rating lingers at just 72.2 and he has had minimal success rushing as well with just 24 yards on seven attempts.

Lamar Miller has been a workhorse with 74 of the Texans’ 86 carries, but with 269 yards he is averaging just 3.6 per carry and his long is just 15 yards. He has recored 11 first downs, but he has been consistent and is a source of yardage. He had 80 yards against New England and also caught four passes for another 27 yards. His fumble occurred against the Bears, but the Texans commanded that game easily and he had 106 rushing yards and 11 receiving yards (on four receptions). Miller is the engine behind the Texans’ attack, but the Titans are also a running team.

Tennessee ranks No. 8 in the NFL in rushing yards with 128.0 per game, and DeMarco Murray is the reason why. This game should be a good battle basically between Murray and Miller, though the Texans’ defensive monster J.J. Watt remains a key factor in neutralizing Murray.

It should be a close game and though the Texans are favored the Titans make an interesting pick at +175, and this writer’s preference is Tennessee to upset by 5-points or less.