Posted on October 7, 2018 by Brett David Roberts in Headlines,NFL 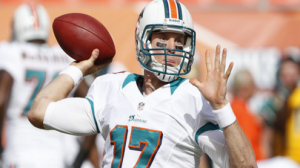 The Cincinnati Bengals improved to 3-1 with its week 4 victory over the Atlanta Falcons. This week it plays host to the Miami Dolphins as 6-point favorites at Noon (CT) on CBS. The over/under is set at 48 points according to NFL oddsmakers at bookmaker 5dimes.

Cincy edged out Atlanta last week as Andy Dalton completed a 13-yard pass to AJ Green with just seven seconds remaining in the game, to edge out the Falcons 37-36 on the road. Dalton completed 29 of 41 in the game for 337 yards, and three touchdowns while throwing one interception but suffering three sacks for 29 yards lost. Tyler Boyd led all receivers with 100 yards on 11 catches, but AJ Green, John Ross, and Tyler Eifert were the trio who managed the TD receptions, and Green had four catches for a second-best on the team, 78-yards.

The Bengals got a decent game from its backfield, though it attempted just 23 rushes in the game. Giovani Bernard led the team with 69 yards and two touchdowns, and Dalton rushed twice for 13 total yards. Bernard has rushed 34 times for 155 yards this season and a team-high three rushing TDs, while Dalton has just four rushes on the year for 21-yards.

Joe Mixon leads the team in yardage with 179 yards and a TD. Mixon is listed as questionable this week and he was a limited participant in practice on Thursday, as he nurses a knee injury. With Bernard doing so well, the Bengals can probably manage without Mixon, but if he plays he will give the team more options and depth when it does seek to rush the football.

The Dolphins lost its first game of the season last game, falling to 3-1 as it was handed a 7-38 defeat by the New England Patriots. The Dolphins have had its bye-week but it maintains a half-game lead over the Patriots in the AFC East. That probably will not last.

Miami has struggled to score, ranking just No. 26 in the NFL at 20.5 points per game. The pass offense is under 200-yards per, and the rush attack is good for just 88 yards per game. Ryan Tannehill has shown some of the best signs of his career, but even his 106.1 passer rating and 7-to-3 touchdown to interception ratio have not really been enough with the struggles of Miami’s running backs. Frank Gore has been mediocre at best, averaging just 4.0 yards per rush on his team-high 35 attempts. Tannehill has had success and leads the team with 4.6 yards-per-carry, but he has rushed just four times per game, and this is a rather one-dimensional offense.

Kenny Stills leads all receivers with 224 yards and three touchdowns, and Miami has scored nine receiving TDs while scoring just three via the rush. It boasts four players with 100-yards or more receiving on the year, but disturbingly the Dolphins have just 37 first downs via the pass while having given up 60 to its opponents. Moreover, it is being out-driven by a total yardage count of 874 Miami, and 1,173 opponents.

The Dolphins should count itself fortunate to have a 3-1 record because with so many red flags the team really could be the inverse of that .750 winning percentage.