Posted on November 12, 2017 by Brett David Roberts in Headlines,NFL 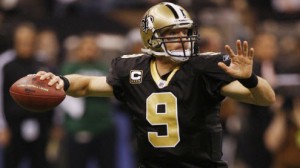 The New Orleans Saints are 6-2 and have won six-straight games since beginning the season 0-2.

New Orleans now travels to Buffalo at Noon (CT) Sunday to face the Bills on FOX. NFL oddsmakers set the line 1-point in favor of the visiting Saints, with an over/under of 47 points according to NFL oddsmakers at bookmaker 5dimes.

New Orleans disposed of Tampa Bay 30-10 last week, its third-consecutive week of holding opponents under 20 points. The Saints defense ranks No. 9 in allowing just 19.4 points per game, and it has goaded the team to success as its offense has been more than taking care of things with 27.6 points per contest (No. 6). The Saints have a third-ranked pass offense that generates 269.8 yards per game, and its rush attack is equally as effective at 122.8 yards per game (no. 7).

New Orleans, of course, has plenty of weapons to make sure it stays this way, not the least of which are legendary quarterback Drew Brees and its effective backfield tandem of Mark Ingram and rookie Alvin Kamara. Kamara, for his part, has been a powerful weapon to inject into an already-strong offense. The rookie is averaging six yards-per-carry on 52 attempts, in addition to ranking No. 3 in reception yards (341 on 37 catches). Ingram, of course, is a steady back and is good for 541 yards on the year as well as a team-leading 23 first downs.

Ingram also leads the way in rushing TDs with four, and Kamara has rushed for three in addition to his two receiving TDs. Brees has been sensational again, with 2,214 yards and an 8.1 yard per catch average. He has thrown for 269.8 yards per game with an ultra-low Interception percentage of just 1.5 percent. Brees has thrown for 13 TDs on the year with just four interceptions while having incurred eight sacks (one per week is not too bad). His top two receiving options, Michael Thomas and Ted Ginn Jr., both have caught for a combined 1,025 yards while scoring five TDs between them. Kamara functions more like a short-route receiver, naturally, but between that duo and Kamara, the Saints prove to be unflappable moving the ball via the pass.

The Buffalo Bills are 5-3 this season but have maintained a perfect 4-0 mark at home this year. Buffalo most recently knocked off the Tampa Bay Bucs and Oakland Raiders at home, defeating both teams by a combined score of 64 to 41. Buffalo ranks No. 6 in defense, allowing just 18.6 points per game, but it has had its issues with a lack of consistency. It needs that strong defense being a middle-of-the-pack team offensively. Buffalo averages 21.8 points per game, ranking No. 16 in the NFL, and the culprit has been a passing offense that ranks third-to-last in the league.

Tyrod Taylor threw 29 of 40 last week for 285 yards, including two TDs, but it was not enough because the rush offense did so little. LeSean McCoy managed just 25 yards on 12 carries, and Taylor led the team with 35 rushing yards on his six attempts. Buffalo simply cannot manage to be effective via both the pass and rush in the same game and its defense was not that stringent against New York last week, as it gave up 194 rushing yards to the Jets, while also fumbling the ball four times on offense (three of which were lost). Those costly mistakes allowed the Jets to knock off what is ostensibly a better team, but a team not immune to silly mistakes and lapses in team-wide concentration.

Taylor is an improvement over what Buffalo had at the QB position, but his passer rating lingers at a paltry 95.8, and he has fumbled twice on the year while throwing two interceptions. It mitigates the effectiveness of his 65.3 percent completion ratio, as does his meager 6.9 yards per reception.

It is easy to see why Buffalo struggles at times, but finding solutions to Taylor’s mistakes is trickier. He is now in his seventh season out of Virginia Tech and is clearly starter material, but Buffalo has to find some answers to get its pass offense going or the result is going to be a frustrating and mediocre season, in which it never fully gives the defense what it needs to win it games—particularly on the road.