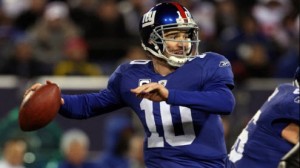 The Philadelphia Eagles lead the NFC East with the NFL’s best mark at 11-2. It will travel to face the cellar dwelling New York Giants as 8.5-point favorites Sunday at Noon (CT) on FOX. Philadelphia is 5-2 on the road this season, and the Giants are just 1-5 at home. The over/under for the game is set at 40.5 points according to NFL oddsmakers at bookmaker 5dimes.

The Eagles bounced back last week and won 43-35 over the L.A. Rams after suffering just its second defeat the week prior to the Seattle Seahawks. Philly lost Caron Wentz last week to a knee injury, and Nick Foles stepped in to guide the team to victory. Prior to suffering the knee injury, Wentz had thrown 23 of 41 for 291 yards and four TDs with just one pick. Torrey Smith was the biggest beneficiary with 100 yards on six catches, while Trey Burton contributed 71 yards and a pair of TD catches. Leading rusher Jay Ajayi rushed for 78 yards on 15 carries, but the Eagles did not manage a rushing TD in the game. Defensively, they limited Jared Goff to just 199 yards and no TD passes, while the Rams rushed for 109 yards on 17 carries (6.4 yards per carry). Defensively, Nigel Bradham came through with six tackles (two for loss) and the Eagles had 4.5 tackles for loss as a team and two sacks.

Philadelphia will again start Nick Foles, which makes Ajayi’s ball carrying crucial. He is averaging 7.0 yards per carry since being acquired from the Miami Dolphins. Zach Ertz also returns to boost the pass attack, and he leads the team with 57 catches. He just cleared concussion protocols. Ertz has 663 receiving yards and nine of his last 15 catches have been for a first down. Kicker Jake Elliot has made 18 of his last 20 attempts, including a 61-yard field goal to win the first meeting between these teams.

The Giants have dropped its past three games with losses to the Washington Redskins, Oakland Raiders and Dallas Cowboys. Eli Manning has declined a lot this year, and is averaging just 6.0 yards per reception with nine INTs to his 15 TDs. He has thrown for 2,639 yards but has a passer rating of just 82.4, and despite Evan Engram, Sterling Shepherd, and Odell Beckham Jr. having fine seasons, the Giants rank just No. 22 in the NFL in passing offense (206.1 yard per game) and No. 28 in the rush attack (90.1).

The Giants manage just 15.2 points per game and give up 24.7, and the team has not been good by any stretch of the imagination. It may be that the team looks past Manning this offseason and attempts to get its QB of the future, because this season kind of spells the end to an era that never went anywhere near as successful as Giants fans might have hoped it would.