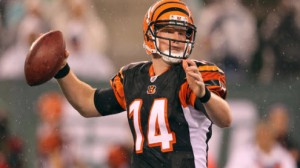 The Minnesota Vikings sit atop the NFC North at 10-3, but suffered a 31-24 loss to the Carolina Panthers a week ago. Minnesota had won eight straight prior to last week, and is 5-1 at home where it will host the Cincinnati Bengals as 12-point favorites according to NFL oddsmakers at bookmaker 5dimes. The over/under is set at 42 points for the game which will air at Noon (Central) on CBS.

Minnesota has been sensational this season and Case Keenum has been perhaps better than anyone expected. The 5th year quarterback from Houston has thrown for 2,983 yards at a 66.8 percent completion clip with 18 TD passes and just seven interceptions. Last week, however, Keenum threw for 280 yards but had two interceptions to match his two touchdowns in the loss. He had not thrown a pick since Nov 12 against the Washington Redskins, and he has thrown for 280 yards or more in four of his last five games. Keenum also has thrown an average of 2.2 touchdowns per game over his past five. His top receiver has been Adam Thielen, who has caught for 1,161 yards on 80 catches with four TD passes.

Stefon Diggs has 694 yards and five TDs. Kyle Rudolph is No. 3 in receiving yards with 506 but leads the team with seven reception TDs. The Vikings have managed 21 TD passes on the year, with 12 TDs coming via the rush. Latavious Murray leads the team in yardage (586) and TD rushes (five). Jerick McKinnon is No. 2 in both yardage (460) and TDs (three).

The Vikings rank No. 7 in the NFL in rushing yards (121.1 per game) and No. 10 in passing yards (248). The team also ranks No. 2 in the NFL in team defense, allowing just 18.1 points per game while scoring 23.8 itself (+5.7 point differential). Minnesota has all the makings of a contending team, and it will close its season with games against the Green Bay Packers and Chicago Bears.

The Cincinnati Bengals are 5-8 and 2-4 on the road this season, and it has lost its past two games with losses to the Pittsburgh Steelers and Chicago Bears. The Bengals have got another respectable season from QB Andy Dalton, who has thrown for 2,747 yards and 21 TDs with nine interceptions. But Dalton has been sacked 32 times and has a passer rating of just 90.4. The Bengals rush attack has been weak. The team averages just 3.5 yards per rush, and Joe Mixon leads the way with 518 yards but just 3.3 yards per carry. Giovani Bernard has been better at 4.5 yards per attempt, but has just 58 rushes on the year for 260 yards and no TD rushes. The Bengals have rushed for just four TDs on the season.

The No. 1 receiver has been A.J. Green with 65 catches for 950 yards and eight TDs. Brandon LaFell, Tyler Croft and Bernard have all caught for 300 yards or more, and Kroft has five TD passes. The Bengals top-four receivers all average better than 10 yards per catch, but Dalton averages just 7.1 per reception. Dalton has also rushed 33 times for 102 yards, but he has fumbled once and only come up with nine first downs. The Bengals rank No. 28 in the league in offense, generating just 17.4 points per game, and it has a No. 26 rated pass offense (197.8 per game) and second-to-worst rush offense (79.4). It is easy to see how the team is sub-.500, but more difficult to see how it is not worse still.