Posted on September 25, 2014 by Brett David Roberts in College Football,Headlines 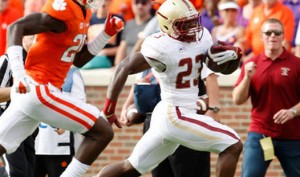 Colorado State has opened the season 2-1 with victories over Colorado and UC-Davis, and the loss in between those victories to Boise State, 37-24. The Rams have outscored opponents by an average of 34.7 to 25.0, but will find itself 9.5 underdogs to the Boston College Eagles according to college football odds.

The Rams have been very good with the pass, ranking 11th in the nation with 340 yards per game. Rushing hasn’t gone poorly either, averaging 172.7 yards per game. QB Garrett Grayson has been excellent, with a 4:1 TD:INT ratio and 993 passing yards in just three games. He’s thrown for an average of 8.87 yards per completion too, helping account for a high QB rating of 153.4.

In the backfield, the Rams have received major contributions from both Treyous Jarrells and Dee Hart. Each has scored two TDs on the year, and have combined for 395 yards already. Jarrells is averaging 6.2 yards per carry, bested only by No. 3 back Jason Oden Jr., who has rushed for 83 yards on just nine carries.

Boston College is 3-1 on the year. The Eagles won over UMass, then-No. 9 USC and Maine. The loss came to Pitt in Week 2, by a score of 30-20. The Eagles have been pretty much the antithesis of its opponent, as a tough team on the rush. BC has averaged 336.3 yards per game on the ground, good for 5th in the nation.

The reason the Eagles don’t throw more is because Tyler Murphy isn’t that accurate. He’s thrown five INTs to just three TDs on the year, and has completed only 51.8 percent of his passes.

In the backfield, however, the Eagles have three rushers with more than 200 yards, the highest of which is actually Murphy. The QB has rushed for 500 yards on 55 carries, for an astounding 9.1 yards per carry. He’s scored five rushing TDs, to just three via the pass.

Jon Hillman and Myles Willis have both averaged roughly five yards per carry, and Hillman has four TDs on the season. BC is 9.5 point favorites because the team is so unstoppable on the rush.

This contest, though, really could swing either way, with both offenses disproportionately strong comparative to the teams’ respective defenses.

Two offensive linemen (Benson and Sambrailo) are questionable for the Rams, so keep an eye on how that may affect the attack, should either or both miss this contest.